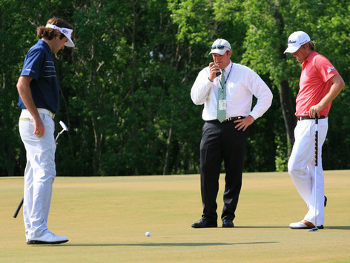 THERE’S talk from the US suggesting the ball movement rule that possibly cost American golfer Webb Simpson his first PGA Tour victory on Sunday may change.

Simpson said it was a “bad rule” when he was penalised a stroke when his ball moved as he was addressing it on the green during the final round of the 2011 Zurich Classic of New Orleans.

US Golf Association Vice President Thomas O’Toole indicated yesterday there had been discussions with the R&A on the rule for some time and foreshadowed action on the issue by the end of the year.

“If some other agency – wind or gravity – is known to cause that ball to move, no penalty would be applied,” O’Toole said.

Whilst the move wasn’t something specifically spurred by the events of Sunday, it was another case where action is being forced by the latest high definition television broadcasting where viewers can see the tiniest of ball movements in replays.

In the final round of the tour event on the weekend Simpson was leading by a shot on the 15th when addressing the ball less than a foot from the cup.

The ball moved slightly, probably caused by wind on the dry and hard green and he was penalised a stroke. He finished the 72 holes even with Bubba Watson, who went on to win their playoff.

“I better limit my comments on that rule, because I think it’s such a bad rule,” Simpson said. “When the wind or other natural things affect the golf ball, the player shouldn’t be penalized.”

O’Toole said a possible rule change had been under consideration with the R&A for at least seven years but would now be addressed in earnest in coming months.

He was confident a change would be implemented by early 2012 but stressed it was not a done deal.

The suggested change would modify Rule 18-2b and would declare that “if it was known or virtually certain that the player did not cause that ball to move, then the (penalty) does not apply.”

“I think this is a better place to be than penalizing players unfairly,” O’Toole said.

“…..Deeming the player to cause [the ball] to move applies in 90 percent of the situations, but it doesn’t apply sometimes. And, in that case, the exception applies and no penalty.”

Most golfers would have faced this situation on a windy green with the ball appearing to vibrate slightly and cause doubt whether it had actually moved.

The suggested rule change would seem to make a whole lot of sense.