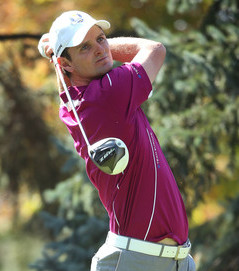 VICTORIOUS Ryder Cup combatant Justin Rose is the latest addition to an increasingly attractive field for the 2012 Emirates Australian Open.

It’s been a good week for the Sydney tournament with news a couple of days back the Seven Network has agreed to provide live free to air television coverage of the event.

Rose, the current world No.5, has had a big year. He won the

WGC-Cadillac Championship in March and then was runner-up to Brandt Snedeker at the US PGA Tour Championship last month.

He capped the year off with a key role in Team Europe’s heroic Ryder Cup victory at Medinah.

The 32 year-old four-time PGA Tour winner said he was excited about returning to Australia.

“I’m looking forward to coming to Sydney for my first trip back to Australia in a few years and I’ve always enjoyed it,” Rose said.

“This will be my Australian Open debut and the tournament has a history of wonderful champions and I hope I can add my name to that list in December.”

Rose has tasted success in Australia before, winning the Australian Masters in 2006 at Huntingdale.

The 2012 Emirates Australian Open will take place at The Lakes Golf Club from 6-9 December.