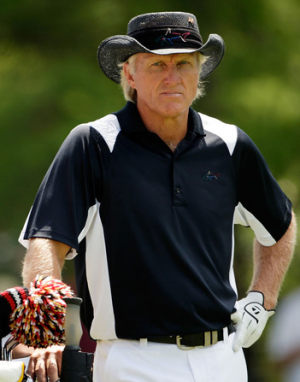 GREG NORMAN has been well and truly Funked in his latest attempt to win a major senior golf title.

Playing in the final group at the US Senior Open, Norman watched fellow competitor Fred Funk play superb golf to take the tournament by six strokes.

At the aptly named (for some) Crooked Stick Golf Club in Carmel, Indiana, Norman again faded in the final round of a major championship, struggling to a one over par 73.

He started the day just one shot off the pace but had to settle for fourth place tied with Senior British Open winner Loren Roberts, who closed with a 64.

It was a triumph for the 53 year old Funk, whose final round seven under 65 gave him a tournament record 20-under total.

“It’s something I really didn’t fathom happening, but the biggest thing is just getting my name on that trophy,” Funk, who lost a playoff with Roberts for the Senior British Open last week, said.

It was his second senior major and goes in the cupboard with eight PGA Tour wins and five Champions Tour victories.

Funk commented later he thought Norman lost some confidence on the 6th, when the two time Open Champion found water off the tee on the way to a double-bogey.
“Just momentum, it wasn’t my day,” Norman said of his round.

“No matter what I did it seemed, it was the wrong thing.”

“Freddy played great today and I played poor. He deserves to win, when you shoot seven-under, that’s very, very impressive.”
Funk said Norman didn’t seem to be quite on his game.

“He just didn’t have control of the golf ball like he did yesterday,” Funk said.
“He didn’t drive quite as good and got himself into a little bit of trouble. And a couple of his good shots didn’t turn out good and it started eating at him a little bit.

“And he is seeing me a couple of times, and I think it gets irritating when your playing partner hits a couple of scruffies and ends up making pars on the holes and it can eat at you pretty good.

“It started going down when he hit a good shot on six and hit that tree and went in the water. It wasn’t that bad of a shot, and you don’t think that tree is going to come into play and it did.”

American Joey Sindelar (70) finished second at 14 under, Russ Cochran (68) was 12 under, and Roberts and Norman followed at 11 under.
British Open runner up Tom Watson, who has been hampered by injury, shot an even par final round to finish at two over and tied for 43rd.

We were hoping to be proved wrong but unfortunately not:

Norman leads the US Senior Open, but don’t hock the silverware just yet