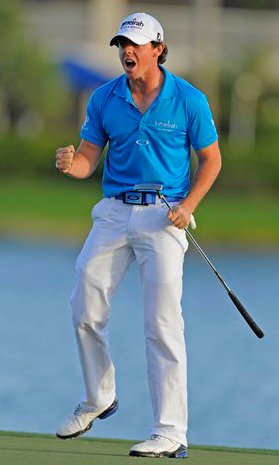 THE dreams of a 10 year old boy to be the best golfer in the world came true today when Rory McIlroy claimed the sport’s number one ranking.

“I didn’t know I could get here this quickly,” the now 22 year old Northern Irishman said after taking the 2012 Honda Classic in Palm Beach, Florida by two strokes.

The result had all the hallmarks of an historic moment in the game’s long and proud tradition, with all-time great Jack Nicklaus sitting in the commentator’s chair for the final holes and a resurgent Tiger Woods siting in the players’ area as clubhouse leader.

“It was just one of those days,” McIlroy said of how events unfolded, particularly the 62 shot by Woods and the 63 by fourth placed Lee Westwood.

He had started the day with a two shot lead and believing that in tough conditions on a tough course if he concentrated on just making fairways and greens a par would probably do it.

What he didn’t foresee was that he would be lining up his birdie attempt on the 13th green and hear a huge roar from across the PGA National course that would announce an eagle by his childhood hero Tiger Woods.

“It wasn’t a birdie roar,” McIlroy said. Woods had finished birdie, eagle on his last two holes to post his 8-under 62, the best final round in his PGA Tour career.

Woods finished at 10-under with the clubhouse lead.

The young Irishman was no doubt already feeling the pressure of what had the potential to be a defining moment in his career and that roar, particularly as he approached the infamous dangers of the three hole “Bear Trap”, was probably the last thing he wanted to hear.

But as the trap’s designer Nicklaus suggested from the commentary box, overcoming such moments and such obstacles are what champions and world No.1’s are supposed to do.

Many had long suggested McIlroy is a special and gifted golfer and this was his time to prove it.

In the end it wasn’t his much lauded effortless swing, driving and superb iron play that got him home, but the short game he once derided.

He had a number of crucial up and downs and clutch putts to save par, particularly his par from the thick greenside rough on the 14th.

He got through the “Bear Trap” – the 15th, 16th and 17th – without incident and on the 18th with a two stroke buffer took some earlier sage advice from Nicklaus – just do what you have to do to win.

With water and danger all down the right side of this par 5, he laid up, had a wedge into the centre of the green and two putted for par.

McIlroy became the 16th player to gain the world No.1 ranking and in a symmetry that seemed to add to the portent of the day, he is the second youngest since Tiger Woods attained the rank as a 21 year old in 1997. Many believe McIlroy is now on the verge of a similar career path.

“I’d like to stay for a while,” McIlroy said. That could be a major understatement.

[quote style=”boxed”]You know, I always had putts on the putting green when I was ten years old to beat Tiger Woods or to beat Phil Mickelson. But hopefully it would be great to turn that into reality at some point. But yeah, I mean, they are the best two golfers of this generation, and obviously Tiger’s the best by a long way. I mean, it’s just?? it’s quite an honor just to be mentioned in the same sentence as those two guys. Phil has won 40 tournaments and four majors, and Tiger has won 14 and 70 TOUR events, and here is me sitting with my third PGA TOUR event, so it’s a little different. Hopefully one day I’ll be able to get to the stature of those two guys. [/quote]

Greg Chalmers (71) threatened all tournament but was one of those to succumb to the Bear Trap in the final round.

Chalmers had a bogey on the 16th and found water for a double on the 17th but came back with a birdie on the last to finish at 4-under, tied for 12th with Keegan Bradley and two others.

Stuart Appleby had a final round 68 to be the next best placed Aussie on 1-under while Robert Allenby finished with a 69 to be 2-over.