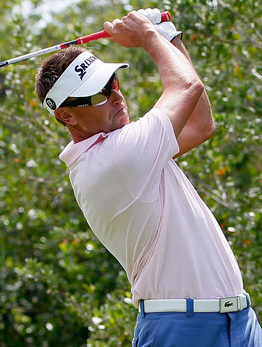 ROBERT ALLENBY will likely still be smarting a little when he tees off in the 2012 Honda Classic early Friday over his blown title chance in Mexico on the weekend but he knows there are positives afoot.

Allenby had a two stroke lead standing on the 18th tee of the USPGA Tour Mayakoba Classic when a poor club choice led to a double bogey that put him in a sudden-death two man playoff with rookie John Huh.

The playoff went for an agonising eight holes before the very experienced Aussie golfer succumbed.

“Yeah sure I should have won that last week,” said Allenby. “I have too much experience to screw it up like that but at the same time I have to take the positives out of the week.”

A big positive is that the runnerup finish (it would have been his first victory on the tour for 10 years) dropped him 10 places to world No.60. He needs to drop 10 more to go inside the magic 50 figure that will include him in the 2012 US Masters ( April 5 – 8 ) and have him join the six Aussies currently qualified (Jason Day, Adam Scott, Aaron Baddeley, Geoff Ogilvy, John Senden and Bryden Macpherson.)

Another factor is the confidence of knowing he has some reasonable form. He was 8 under for the final round in Mexico before his final hole woes.

“I have totally put it behind me. The only thing I can do now is make sure nothing like that ever happens again,” Allenby said. “That’s golf. You have to learn from your mistakes and move on. I have come away with more confidence in where my game is and, who knows, it might just help me to come out this week and win.”

Allenby will lead a contingent of six Aussies taking on the Honda Classic at the Jack Nicklaus re-designed PGA National Champion Course not far from his US base in  Palm Beach.

The Aussie line-up for what is the first US PGA Tour east coast tournament for the year includes Greg Chalmers, who co-owns the course record of 64, Stuart Appleby, Marc Leishman, Nick O’Hern and Rod Pampling.

McIlroy another chance at No.1

The tournament will give Rory McIlroy another chance at becoming world No.1 – he needs to win to take top spot – but there is also the chance for rival Lee Westwood to edge closer.

McIlroy is partnered in the first two rounds with fellow young hotshots Keegan Bradley and Kyle Stanley while Westwood will play with Tiger Woods – competing in this event for the first time in his career – and fellow Englishman Ian Poulter.