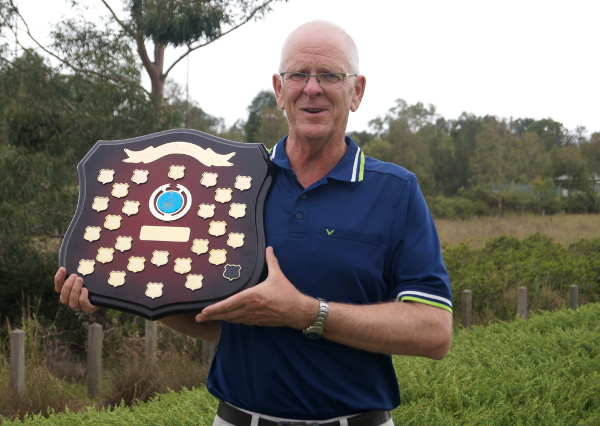 YOU get the distinct impression talking to John Osborn that when it comes to golf he has never been much of a big noter.

Sure, the 58 year old Mudgee Golf Club member was “absolutely rapt” recently to have won his first ever state golfing title, but blamed the victory on an errant “bit of a purple patch” rather than any great innate golfing prowess.

Osborn had just been presented with the Des Coady Memorial Shield for taking out the 2019 NSW Veteran Golfers Association Strokeplay Championship, a scheduled three day event that had endured its own weather and climate related dramas.

Severe drought conditions that had affected much of the country also hadn’t been kind to the golf courses of Western Sydney, venue for the vets championship since 2014.

So much so that one of the three chosen venues for 2019, Dunheved Golf Club, had just a few weeks ahead of the event put its hand up to say the course condition just wasn’t up to scratch for a state championship.

Fortunately for organisers, the Western Sydney Region Veteran Golfers Association, the very picturesque and feature rich Glenmore Heritage Golf Club was able to step in as a replacement at the last minute.

That saw the historic Richmond Golf Club hosting the first round of the over 55’s championship on the Monday, Glenmore replacing Dunheved on Tuesday, and the Greg Norman designed top 100 rated Stonecutter’s Ridge taking the final round on Wednesday.

Given the drought had taken its toll on all the courses to some extent, it was just a little ironic that the first groups out early Monday morning only got through half a dozen holes at Richmond before the heavens opened up.

Pretty soon greens and fairways were awash and tournament director Les Knox was forced into making a cancellation decision he later said was the hardest he had ever faced in his many years organising events.

Some 140 golfers – mostly from across the state, but also from as far afield as Darwin (and in one intrepid case from England) – were signed up for the championship, with many still on their way when the first round was officially abandoned.

The championship in recent years has been part of the NSW Senior Order of Merit series and as such has been attracting increasingly strong fields.

One of those was Osborn, arriving amidst a strong contingent from the Dubbo area, and sporting a one handicap.

“I’m not a one handicapper by any stretch of the imagination,” Osborn claimed, explaining he was really more like a three handicapper who had just fluked a couple of good rounds and benefited from the new handicapping system.

Still, he came out on the Tuesday to shoot a 73 off the stick and lead the field by two strokes, with 2018 defending champion Ricky Allison (Camden Lakeside) and Richard Wood (Cumberland) both shooting 75.

Osborn fired a 75 in the final round to shade by a single stroke a fast finishing Geoff Cranfield (Long Reef) who shot 71 to finish overall second.

Osborn was delighted with what was an obvious high point in a golfing career stretching back to his childhood.

“As a kid I found a set of sticks under dad’s bed that he never used and I started mucking about,” Osborn recalled. “Then a couple of cousins and a few mates started playing.  I was playing socially and then eventually joined [Oberon Golf Club as a 15 year old] and I’ve been pretty much been playing ever since.”

“I was self-taught I didn’t have any lessons. I had a pretty unconventional swing. I’ve had a few lessons in later years, but it was too late by then.”

Osborn was a school teacher and a regular Saturday competition player at a number of clubs as he moved around.

Two years ago he retired from teaching and began playing senior order of merit events, mostly in NSW.

“I’ve played more golf in the last two years than I have ever played,” he said.

“I love it. It’s a great format, fabulous guys, a lot of good people, I’ve been clocking up a lot of miles in the car.”

“While you’re fit and healthy do it while you can because there will come a time when you won’t be able to do it.”

The NSW Vets Championship will return to Western Sydney for the seventh straight year in 2020, and as far as Knox and his hard working committee are concerned, going into the future. However, there is a push for the 2021 event to move to Dubbo, hence all those visitors from the area.