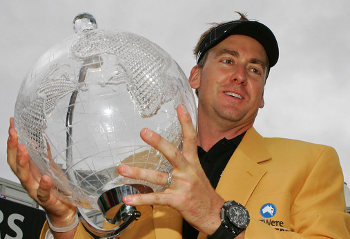 THE wind at times became almost strong enough to blow the checks off his trousers but in the end Ian Poulter had the stability to produce an almost flawless round of golf to take the 2011 JBWere Masters at the Victoria Golf Club.

Poulter had started the day two strokes behind hometown favourite Geoff Ogilvy but he dispatched the deficit on the very first hole with an eagle two.

The Englishman took the lead with a long birdie putt on the 7th and the anticipated duel between the two match play specialists largely fizzled from there.

Coming off his superb 8-under 64 on Saturday, Ogilvy was just slightly out of tune and though he continually showed the ability to save par when it really mattered he just couldn’t produce more.

When he finally did sink a long birdie putt on the 16th to momentarily inject some life into the contest, Poulter struck straight back immediately with a putter that had run hot all day to make his own birdie and maintain his four shot lead.

When Ogilvy seemingly decided to try and make it all up with one massive hit off the tee on the long par five 17th the shot went way right into water and the tournament was virtually over.

With the pressure off, Poulter allowed himself his first and only bogey of the day. Before that, he had been the only golfer in the 64 man field without one.

Poulter finished with a 4-under round of 67 to be three shots clear of Aussie Marcus Fraser, who overtook Ogilvy with a 64, the low round of the day.

With the help of his double bogey on the 17th, Ogilvy finished with a dispiriting 73 but still alone in third spot on 11-under.

The only player apart from Poulter and Fraser to shoot four sub-par rounds in the tournament was the ageless Peter Senior (70) who shared fourth place at seven under with Adam Crawford (66), while world No.1 Luke Donald eased to the line with a 72 to sit alongside 2011 Australian Open and PGA champion Greg Chalmers at four under.

Poulter probably didn’t really need another clothing item for his extensive wardrobe but he gleefully accepted the Masters gold jacket.

“It’s a nice end to the year, to be honest. It’s been a difficult year, but obviously now there’s a couple of special highlights to the year, this being the second one. To come down here at the end of the year to play as well as I have played and to be the Aussie Masters champion is very special,” he said.

“Today was a day for patience. You had to hit shot after shot. There was no getting away with bad shots today.”

“I didn’t really want to get in to a match play slugging match with Geoff; I just wanted to play golf. So I concentrated pretty hard on doing that and putting the ball in play and I guess putting Geoff under a little bit of pressure. For me to win this tournament at the end of the year in a Ryder Cup year puts world ranking points on the board for me, and that’s very important to do that.”

“My last two months of golf has been as good a golf I have played throughout my career. I think I have had about four top 10s and an 11th finish in the last couple of months. So to play like that is very rewarding,” Fraser said.

Ogilvy was disappointed but magnanimous in defeat.

“Ian played very well. I didn’t play very well. He had 4 under today, that’s a pretty good score out there in a pretty tough day. What are you going to do? I couldn’t really make a birdie all day,” he said.

If you’re not one of Poulter’s 1.2 million Twitter followers you probably missed what he communicated to his fans immediately after his round:

“Winner winner chicken dinner … what a way to end the year.”

Sorry if you already knew that.