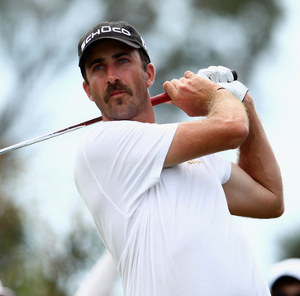 A RAMPANT Geoff Ogilvy shot an 8-under 63 to equal the course record and take a two stroke lead going into the final round of the 2011 JBWere Australian Masters.

Ogilvy got off to a great start Saturday hitting a three iron off the first tee he said was one of the best shots he had made all year.

It resulted in an easy eagle putt on the short par four of his home club, the Victoria Golf Club, and set the tone for a round that long threatened to reach the magic 59 mark.

A couple of bogeys on the back nine scotched those thoughts but the Victorian was obviously stoked after a round that put him in the box seat to win the Masters, the only one of the three major titles he has not yet claimed.

“Obviously I’m very comfortable out here at this golf course.  I’ve probably played here more than I have played any other course in the world. It is fun to come back to Melbourne always and play, but especially play here,” said Ogilvy who finished at 13-under for the tournament.

Ogilvy said while playing he hadn’t really known the relevant course record and didn’t really give much thought to posting an historic 59.

“I didn’t ever really start thinking about crazy numbers,” he said.

“I just knew I was going low. At one point I was two or three in front, and I wanted to just get as far in front as I could at that point. So I didn’t really think about a number.”

Overnight leader Ian Poulter now trails by two. The Englishman struggled to handle the wind gusts around the Victoria Golf Club as well as Ogilvy whose home course experience made all the difference.

“You have to respect this golf course; it is dead simple,” said Poulter.

“I made a couple of mistakes, holed a couple of nice putts. But I guess hats off to Geoff for going out shooting 8 under par in that wind today. That’s a great score. When someone posts a course record on you on Saturday, then generally they move forward.”

In a repeat of the final day of the 2006 US Open, Ogilvy’s first and only Major win, he and Poulter will again be paired tomorrow.

Meanwhile Nathan Green shot a third round of 4-under to climb the leaderboard and finish in a share of third alongside Ashley Hall who again showed grit with a round of 3-under.

Greg Chalmers put himself back in range for the ‘triple crown’ chase, a birdie on the last sitting him at 7-under in a share of 5th heading into the final day.

Also at 7-under are Stephen Bowditch, Peter Lonard, Kieran Pratt and Matthew Giles.