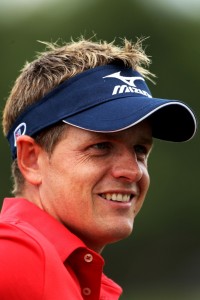 LUKE DONALD has become the first player to win both the US and European Tour money lists after his emphatic come from behind victory at the 2011 Disney Classic.

The World No.1 performed when it really mattered – coming down the home stretch on Sunday – after many had earlier written of his chances of an historic double.

Donald came into the season-ending US PGA Tour tournament with a substantial lead in the European standings but was well behind American Webb Simpson in the US earnings list.

He needed to finish no worse than second at the Children’s Miracle Network Hospitals Classic and to beat Simpson to achieve a goal he firmly stated pre-tournament he had set for himself.

Donald began the final round five shots behind the leaders and one back from Simpson with the campaign seemingly in tatters.

Two bogies on the front didn’t help but from 10 he began a blistering assault of six birdies in succession to win the tournament by two strokes from Justin Leonard.

“It’s hard to put into words,” Donald said after posting his 8-under 64. “You know, obviously I came here and I told you guys on Wednesday that the goal was to win. You know, nothing was really going to be good enough other than that.

“You know, I think this is probably one of the most satisfying wins of my career just because of that. It was kind of do or die. Obviously it wasn’t looking great after the 8th hole, but I knew I was going to get on to a run.”

“I didn’t play my best golf throughout the week. I knew that something good had to happen. I just just kept plugging away. Obviously to birdie the first six holes on the back nine was the difference this week. I threw a few shots away carelessly throughout the first few days, but this means a lot.”

Australia’s Nick O’Hern was in the mix till late and had his chances before fading to a 71 and tied for sixth.

Happily for O’Hern though, the result put him well within the top 125 (96th) on the money list and secured his full exemption for the tour in 2012.

Not so Steven Bowditch, who had a roller coaster day and eventually finished at 10-under, seven behind Donald, and tied for 16th with Greg Chalmers and others.

That puts Bowditch at 132 on the money list and outside full tour status, though he will get as many as 20 starts, as will Matt Jones at 133rd.

Finishing inside the 125 but near the cut-off were Chalmers (105th) and Rod Pampling (124th), who had a nail biting time after missing the cut.

have to go through the qualifying process in late November.

Also on the way out are Aron Price (165th on money list), Cameron Percy (176th), Steve Elkington (199th) and Michael Sim (225th). (Elkington and Nathan Green will get some starts as past winners.)

Gavin Coles will jump back into the top tour after a gritty victory in the Nationwide Tour’s Jacksonville Open.

The 43 year old Bathurst golfer has battled away on the Nationwide circuit for three years after his last two-year sting on the PGA Tour.

His one stroke victory at the TPC Sawgrass in Florida moved him to 15th on the money list.

The top 25 get promoted so that’s also a certainty for third placed Matt Goggin while at 23rd Newcastle’s James Nitties has one more event to confirm his status.