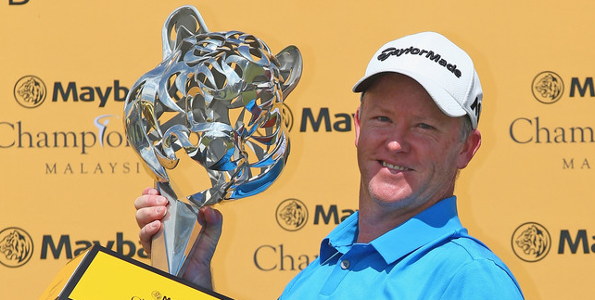 MARCUS FRASER’S superb short game got him home for a third European Tour win while Adam Scott fell just one stroke short of Bubba Watson on the US PGA TOUR.

Fraser came from behind to win the inaugural Maybank Championship Malaysia and end a drought stretching almost six years.

The Australian was two shots behind overnight leader Soomin Lee as he stood on the 16th tee but a double-bogey from the South Korean coupled with a nearly-holed chip opened the door.

A clutch ten-foot putt on the 17th kept the 37 year old Victorian in a share of the lead at 15 under going up the last and there was another knee-trembler on the final green to secure the championship.

Fraser had a seven-year gap between his first win at the 2003 BMW Russian Open and his second at the Ballantine’s Championship.

“In the back of my head I felt like I had a chance,” Fraser said. “He’s quite young and it’s a big thing to be leading a European Tour event with three or four holes to go.

“So I just tried to keep reminding myself to breathe and to play my own game and see what I could do.

“I made contact, it started somewhere near where it was supposed to and went in the hole. I’m gobsmacked at the moment, it feels great.”

Fellow Australian Nathan Holman led the tournament after rounds of 64 65 and finished eighth after a closing 72.

Scott and Leishman threaten in California

Adam Scott got off to a great start in the final round of the 2016 Northern Trust Open at the Riviera Country Club in California to join overnight leader Bubba Watson in the lead.

Scott eagled his first hole and had three birdies by the sixth hole with some great shots and bombs of putts but then messed up the short putter stats when he missed a pair of 4-foot par putts on the back nine.

He bounced back with a key birdie on the 17th and then sensationally chipped in for birdie (see video) from behind the 18th green for a 67 that set the clubhouse lead at 14-under.

Unfortunately, 2014 champion Watson, playing in the final group, birdied 16 and 17 to get to 15-under and held on for an easy par on the last. He signed for a final round 3-under 68.

“A guy like Bubba, he’s very tough to beat,” said Scott, after what was Watson’s 9th TOUR win.

“He’s proving tough to beat from that position. He’s wearing the course out on the toughest day.”

Marc Leishman also threatened at stages, finishing with a 69 to be tied fifth on 12-under while Stuart Appleby (67) and Aaron Baddeley (70) also had good weeks, finishing on 5-under tied 26th.