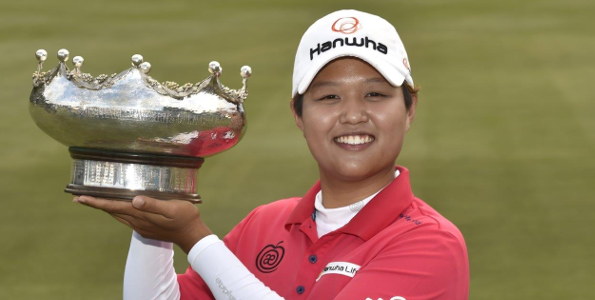 SHE left her only mistake until the last, and by then, Haru Nomura already knew that the ISPS Handa Women’s Australian Open was hers.

She had played one of the great rounds of Australian tournament golf, a seven-under-par 65 that closed out legends of the past, present and future, such as world No.1 Lydia Ko, and hall-of-famer Karrie Webb.

Haru Nomura (pictured, photo courtesy Golf Australia), the 23-year-old from Tokyo, has introduced herself to the golfing world with a thunderclap.

Her dynamic closing round, spiced with monster birdie putts and just 26 blows with the flat stick, took her to 16 under par and a three-shot victory over Ko at 13 under. With three holes to play, New Zealander Ko was just a shot back and threatening, but Nomura just kept hitting greens and making putts, again at the 16th from short range, and yet again from 10m at the 17th with a downhill slider that would have scared most players.

She summed it up afterward: “The putter … wow … unbelievable!”

She bogeyed the last hole from the front right trap, but Ko had suffered the same fate and the pressure was off.

Ko, who finished outright second after a 67, was among the players who rained bottles of water and sports drink upon her on the 18th green.  Asked afterward is she had feared following a player of the world No.1’s status in the game, she said through an interpreter: “There was no pressure.”

Her explanation was that she played the course, not the opponent. The truth is that she had fallen away from 36-hole leads in the first two tournaments of the LPGA Tour season, but this time, she would not yield. Did she consider herself an equal of Ko, she was asked. “Should I tell the truth,” she laughed. “I think I’m better! Maybe…”

She had never previously won an LPGA Tour event, although she did win a tournament as a professional in Japan after turning professional at 17. She did not have a stellar amateur career, but chose to take her game to the US rather than staying in Japan. She has spent the past five seasons on the LPGA Tour, and her world rank had climbed to 67th.

Nomura had eight birdies and only one bogey all day. Among those to wilt to her assault were veteran Webb, who jumped into a share of the lead when she birdied three of the first five holes before faltering to finish third, and Danielle Kang (73) who played alongside her in the final group.

She is the first Japanese winner of the tournament since 1974, when the legendary Chako Higuchi won at Victoria.

Ko was philosophical about her near miss. She gave herself a chance when she holed a birdie putt at the 17th, but in the following group Nomura immediately matched her feat, which was the story of the day. “When another player does it, it’s really out of my hands,” Ko said.

Webb was “frustrated” after a tough day on the greens, yet encouraged by her ball-striking. “What I can take from this week is it’s the best I’ve swung it for a long time and I know that the putts are going to drop, so I just have to be patient,” the Queenslander said.

Of the other Australians, Su Oh came home hard with a 68 to finish tied 14th and Hannah Green, of Perth, carded a closing 69 to finish 20th and earn leading amateur honours.

Big crowds lined the fairways again today, many following Ko as well as Webb, almost oblivious to the fact that the winner would come from the final group. More than 31,000 turned out for the four days, exceeding Golf Australia’s expectations. The decision to move the Open from Melbourne to Adelaide for three years was a massive winner, as Adelaide folk embraced the tournament. Next year, it will be Royal Adelaide.