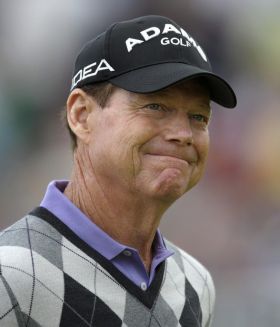 TOM WATSON showed all his renowned competitive spirit to take the 2011 US Senior PGA Championship in a sudden death playoff at the Valhalla Golf Club in Kentucky today.

At 61 Watson became the second oldest player (pipped by a year by Jock Hutchison at the same event in 1947) to win a golf major.

“Pretty good for an old geezer,” Watson said when introduced to take the trophy. “It’s what I am out here to do.”

Watson drained a three foot birdie putt on the first playoff hole to beat fellow American David Eger after they had finished deadlocked at 10 under after 72 holes.

“When you’re walking up the 18th hole and you have a chance to win a tournament like this, you’re nervous,” Watson said. “You’re nervous. But you’ve been there before. And I said, ‘okay, I know that level of feeling in my gut and now let’s go take care of business,'” Watson said.

Australia’s Peter Senior was again in contention in the home stretch of what was the Champion Tour’s second major of the year.

Senior got within two strokes of the leaders after 12 holes and had his opportunities for more birdies late but ended tied for 5th with a 3-under par 69.

Japan’s Kiyoshi Murota finished alone in third, one shot out of the playoff, and Hale Irwin, who had the lead at times and was bidding to become the oldest major champ of all time at 65 (he turns 66 on Friday) finished in fourth at 8 under.

Senior finished at 7-under tied with Argentinean Eduardo Romero.

The 51 year old Queenslander’s five birdies against two bogeys performance saw him pocket US$70,000 to take his earnings in a super consistent season to a total of US$430,000 in just seven events.
Fellow Australian Mike Harwood fought back from a second round 75 to finish tied for 39th whilst Peter Fowler was 66th. West Australian Lyndsay Stephen missed the cut in what was his first Champions Tour appearance.