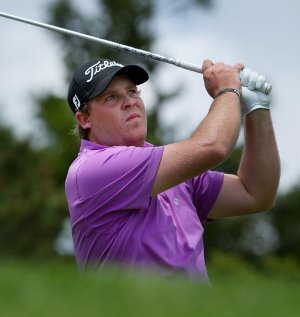 IT IS going to cost one of his mates a tattoo and the weather was a big help but Australia’s Kurt Barnes is absolutely delighted to have won the SK Telecom Open at the weekend.

Barnes won the OneAsia event at the Pinx Golf Club in South Korea by one shot after the final round was cancelled due to fog.

It was his first tour win in two years and the big hitting 29 year old later revealed he was a doubt to even start in the event because of a shoulder injury.

In the end his up-and-down for par at the end of Saturday’s third round saw him sign for a five-under-par 67 to top the leaderboard at 14 under, one clear of Korea’s Kim Kyung-tae. The fourth round was cancelled after only seven minutes.

“It’s unbelievable. On Tuesday I probably wasn’t even going to play. It’s unlucky because I was looking forward to going head-to-head with Kyung-tae, but the delay has played in my favour and the fog hung around and I am the 2011 champion,” said Barnes, who moved into third place on the OneAsia Order of Merit.

“It means a massive amount to me. On Tuesday afternoon I was really considering pulling out and I went to some big lengths to try and play because I had a tour caddie on the bag. If I had just a house caddie on the bag, I would have probably pulled the pin on Tuesday afternoon without a second thought and got everything checked out. But I wanted the opportunity to play and work with Simon (Clarke) as a team and see how we gelled, so to be crowned champion is massive.”

“I now hope that this is a new beginning. I made a bet with a mate back in January that if I won a main tour event this year he would get a tattoo, so I will be sending him a text to let him know,” added Barnes, who last triumphed at the 2009 Sofitel Zhongshan IGC Open.