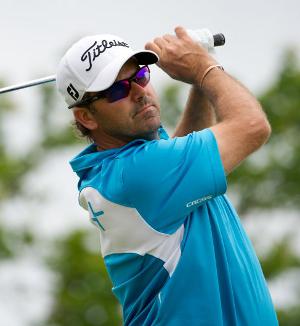 Jeju-do, South Korea, May 19: OneAsia Order of Merit leader Andre Stolz outshone 2011 Players Championship winner KJ Choi to take a one shot lead over the veteran Korean and fellow Australian Scott Arnold after the first round of the SK Telecom Open today.

Indonesia PGA Championship winner Stolz defied the notorious wind at Pinx Golf Club to ship just a solitary bogey in a six-under-par 66 to set the pace at the US$1 million OneAsia event.

World number 15 Choi only arrived on the resort island of Jeju from Florida on Tuesday after beating American David Toms in a play-off at TPC Sawgrass, but was pleasantly surprised to post a 67 to join Arnold two shots clear of a group of four players.

“I played great early on,” said 41-year-old world number 267 Stolz. “It was tough with the wind and with some flags which were not many paces on. While you were also hitting against a wind which felt like a hurricane which made it hard to get on, but I was able to hit some pretty good shots.

“I hit some loose drives on the back nine, but all in all I am very happy with the day.”

After returning to the winners circle in Jakarta at the end of March, seasoned professional Stolz finished 41st at the Volvo China Open before missing the cut two weeks ago in Seoul.

But with his lead at the top of the Order of Merit under threat from GS Caltex Maekyung Open champion Kim Kyung-tae, Stolz’s only first round blemish came with a three putt bogey on the front nine before making amends by starting his second circuit with a timely eagle.

“I played great at Maekyung, but it was the first time I played there and I didn’t know what I was doing. I played good, but a crazy course got the better of me that week,” he added.

“It is also the first time I have played this course and I only played it once during the practice round on Tuesday, but it looks great. It’s windy like Australia and pretty firm and fast so it is chalk and cheese compared to the last one we played in Seoul.”

Former world number one amateur Arnold has missed the cut on all three OneAsia outings this season, but also dropped just one bogey during his hard-fought 67.

“I am very pleased because it is tough. I missed a couple of makeable birdie putts on my back nine, but made a couple of 40 foot putts on the front nine which was nice,” said the 25-year-old.

Korean duo Nam Young-woo and Park Sang-hyun and Australian duo Leigh McKechnie and Adam Crawford opened with rounds of 69 to sit tied for fourth, with a group of four a shot further adrift including GS Caltex Maekyung Open champion Kim.

The SK Telecom Open is being broadcast in Australia on One HD in overnight timeslots.