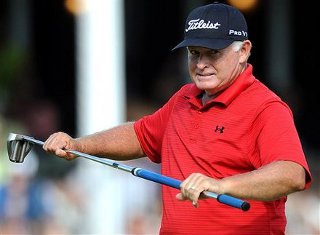 The 51 year old Australian was beaten by former British Open Champion Tom Lehman at the Regions Traditions tournament in Alabama.

In a long and distinguished career Senior has won tournaments around the world but this would have been his first on American soil.

After firing a final round 68 the Queenslander finished equal with Lehman on 13 under.

On the first playoff hole his 15-foot birdie and championship putt tickled the edge of the cup but refused to drop, eliciting a groan from the large gallery crowded around the 18th green at Shoal Creek.

Senior missed his par putt on the second playoff hole handing Lehman his third Champions Tour victory of the year.

Commenting later on the first playoff hole putt Senior said: “It looked like it was going to go to the left and it was on the right edge of the hole, and the last 3 feet it just went dead straight” Senior said. “I really thought with 3 feet to go I’d definitely holed it, but it stayed straight. It was pretty disappointing”.

Despite the miss Senior remained upbeat and gave a lot of credit for his performance to his 17 year old caddie – his son Mitchell.

“I’ve always been a little disappointed on the course when things aren’t going right but Mitch has just been absolutely fantastic,” Senior said.

“He comes up with the weirdest things. I’d have a three-putt and I’d be mumbling to myself and all of a sudden Mitch would say, ‘Jeez, Dad, did you see how good I raked that bunker bank there?’ You know, just completely random stuff.”

“We’ll be walking around, I’ll be muttering to myself, and he’ll say, ‘Gee, how many of these girls are looking at me today, Dad,’

“We’ve spent quite a bit of time together these last two months, and I think we’re going to have a great year.”

Senior will no doubt take loads of confidence out of his second placing.

It is his third top 10 finish in six starts on the Champions Tour this year and he is yet to finish worse than 17th. He is in 6th place in the season long Charles Schwab Cup points standings in a tour littered with legendary golfing names.

“I had a really great week” Senior said. “You couldn’t have asked for better weather, and the course was a joy to play. All in all I played pretty well, and I’m really happy with the way I’m going”.