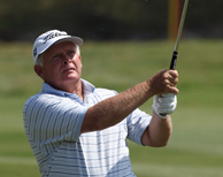 THE US Champions Tour heads south for the 2011 Mississippi Gulf Resort Classic this weekend where 15 former Major champions will be on show.

The Mississippi field also includes Australia’s Peter Senior but not World Golf Hall of Fame member Bernhard Langer who is out of action for two months after surgery on his left thumb following a biking accident.

The injury means Langer will end his run of 27 consecutive appearances at the US Masters.

However, four of this weekend’s competitors will be heading off to Augusta National next week.

Champions Tour regular and 1992 Masters Champion will also be at Augusta but is playing in the Shell Houston Open this week (Couples is on one-under after the first round.)

Two new debutantes on the Champions Tour this weekend certainly weren’t mucking about when it came to getting themselves on this sought after circuit – they both only qualified by turning 50 late last week.

They are Jim Gallagher Jr. who turned 50 on March 24 and Mark Brooks whose birthday was the next day.

Gallagher is a Mississippi local and a five-time winner on the PGA Tour. He was a member of the 1993 United States Ryder Cup team and was also a member of the inaugural U.S. Presidents Cup team in 1994.

Brooks has seven PGA Tour wins to his credit, including the 1996 PGA Championship where he birdied the 72nd hole at Valhalla GC in Louisville to force a playoff with Kenny Perry, then birdied the first extra hole to earn the title. Valhalla will host this year’s Senior PGA Championship on May 26-29.

Peter Senior has had two top 25 finishes in his two Champions Tour starts this year and will no doubt be itching to get back on the paddock after the tour was in hiatus for three weeks due to the cancellation of a tournament.

The 2011 Mississippi Gulf Resort Classic will be played at Fallen Oak, Biloxi, Mississippi and has a prize purse of US$1,600,000.

Final round highlights are scheduled to be broadcast in Australia on Fox Sports on Monday April 4 from 11am to 1pm.