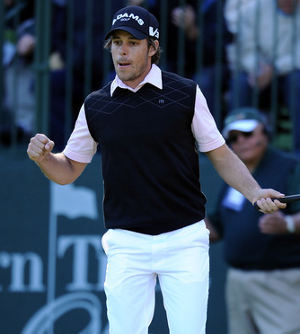 THE 2011 Shell Houston Open begins Friday morning Australian time with four of the Australians in the field hoping to use the event to help fine tune their games before the US Masters next week.

Stuart Appleby, Robert Allenby, Aaron Baddeley and Jason Day will all be playing at the Redstone Golf Club outside Houston before heading to Augusta National next week.

Marc Leishman, who finished equal third at the Arnold Palmer Invitational last weekend, along with Michael Sim, Steven Bowditch, Jarrod Lyle, Matt Jones, Nathan Green, Greg Chalmers, Nick O’Hern, John Senden, Steve Dartnall and Steve Elkington will also tee it up at Redstone and still have a chance to qualify for Augusta – all they need to do is be the last man standing come Sunday.

Adam Scott and Geoff Ogilvy will also be competing in the Masters and have chosen to prepare for the first Major of 2011 in their own fashion.

Reigning Masters champion Phil Mickelson is contesting the Houston title along with a swag of other big names, including current world No.1 Martin Kaymer and the tournament’s defending champion Anthony Kim.

No-one has ever won the Houston event and gone on to hoist the Masters trophy, but records like that are meant to be broken.

The big record of course is that no Australian has ever won the Master…maybe this year.

The Open will be telecast on Fox Sports from 6am to 9am Friday and Saturday, Sunday 5am to 8am and Monday 3am to 8am.