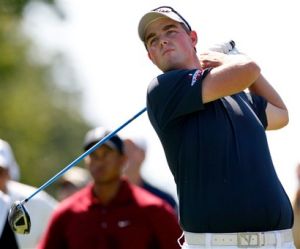 AUSTRALIA’S Marc Leishman had the chance to snatch an unlikely win at the 2011 Arnold Palmer Invitational in Florida this morning but in the end fell two short of Scottish winner Martin Laird.

Laird, 28, began the day two strokes ahead of the field but battled with nerves and hit four bogeys and one double-bogey in his round of three-over-par.

Others were falling apart about him too, particularly the hapless Steve Marino who after again leading well into a final day began collapsing as the prospect of his first PGA Tour win drew closer.

Marino bogeyed the 15th and then had a double on the 17th before fighting back with a birdie on the last. He finished in second place on 7 under one behind the Scot.

Coming off a 66 in the third round, Leishman birdied the 3rd and 4th but then had a bogey and a double before hitting back with another birdie on the 13th.

An eagle on the par five 16th put him in outright second just one stroke from the then leader.

Just when he needed to come up with something special to take the clubhouse lead, Leishman’s tee shot on the tough 18th landed in the rough and the resulting bogey saw him finish equal third with England’s Justin Rose and American David Tom on six under.

The big Victorian, who was the tour’s Rookie of the Year in 2009, is also still searching for his first win on the tour and also needed the win for a start in next month’s Master.

Still, he wasn’t making excuses and said the only nerves he felt coming down the stretch were “good nerves” helping him focus.

Aaron Baddeley and Rod Pampling finished at T12 with a big group on 2 under while John Senden followed his second round 68 with a blow out 76 and finished T24 on 1 under.