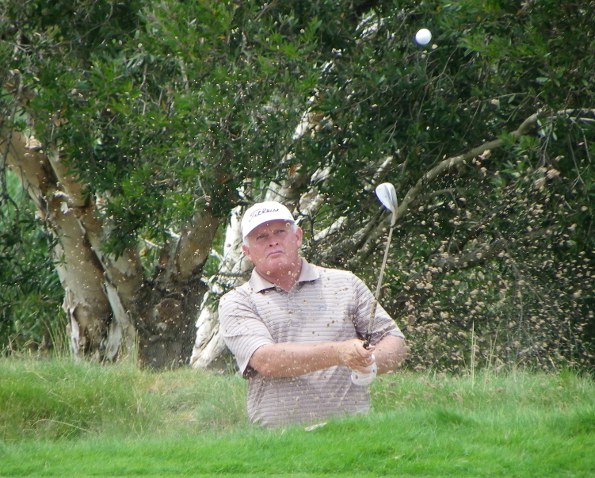 PETER SENIOR is back in the US this week for the first full Champions Tour event of 2011 brimming with confidence after his big successes in 2010.

Senior won the 2010 Australian PGA Championship at Coolum, the oldest golfer ever to do so, won the Australian Senior Open in Perth and was in real contention for much of the Australian Open at The Lakes in Sydney.

The 51 year old also had an outstanding debut year on the lucrative over 50’s US Champions Tour.

We caught up with Senior during the Australian Open in Sydney where he talked about his successes in the US and Australia, his hopes for the 2011 season, his 32 year career as a professional golfer – and he had some pertinent tips for older golfers everywhere.

ASG: Peter Senior thanks for sharing a few moments with us. You must be happy about the way you are playing at the moment? You are 5 under here on the third day of the Australian Open and you have just come off winning the (Australian) Senior Open in Perth?

PS: Playing pretty well. I haven’t holed any putts this week. The greens have been pretty difficult, I putted awful yesterday and I didn’t make very much today so, you know, the way the course is playing there is plenty of opportunity out there and if you can hole some putts you can shoot some good scores.

ASG: It must be good still having the young people after your autograph here? (Senior had just been mobbed by a group of youngsters wanting his autograph.)

PS: Yeah. It’s when you are forgotten, that’s when you have really got to start worrying. But it is always nice to see. I’ve always had a lot of followers and it is good that they’re a little younger now.

ASG: That’s great. You had a really good debut year on the US Champions Tour. Did you enjoy that?

PS: I had a ball over there. I didn’t really know what to expect when I got there but the guys were very accommodating. I just had no problems whatsoever. I tool my wife and kids and I tried to make it as easy as possible for myself and everything worked out really well.

ASG: And are you looking forward to next year (2011)? Do you think you will go even better next year now that you are settled in?

PS: Yeah, can’t wait to get over there. I have got a lot of work I am going to do on my short game. My chipping and my putting has been horrendous. I didn’t putt very well over there this year but I played pretty well from tee to green and I think if I can just tidy it up a little, one, maybe two shots a round, you know, I might be a threat in a few tournaments over there.

ASG: One of your fellow Champions Tour debutants Freddie Couples didn’t make the cut this week unfortunately, but you have. How does that work?

PS: Oh well…you know Freddie hates travelling and he has a lot of problems with his back and it is disappointing he didn’t make the weekend. I tell you he has had a great year over there, I played with him a couple of times and you know the quality of the golfer and, you know, we all have off weeks and he probably had one of those.

ASG: You have been playing as a professional for over 30 years, 32 years I think it is. Do you still have the passion and enjoyment for the game?

ASG: And the body is holding up?

PS: Yeah…I’m a bit creaky in the morning but once it gets going….yeah the body is okay.

PS: No, I have been swinging it the same way for a long, long time now and as long as I continue the way I am playing hopefully I have got a few years left in me.

ASG: Is there anything you have discovered that might help all the older amateurs out there?

PS: I tell you what, you have got to do some stretching. I think that is the most important thing. Once you get around the 40 mark, you have got to start really stretching, keep your body as tuned as it can be. And don’t put on any weight. That’s what I’ll be doing over Christmas, (taps stomach) I’ll be trying to get rid of a bit off weight.

ASG: And practice, I suppose?

PS: Yeah I’m going to do a lot of practice as I said on my short game.

ASG: So when do you head off back to the States?

PS: Not until the 6th of February.

ASG: All right thanks very much Peter, I really appreciate that.

PS: Thanks a lot.