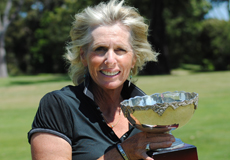 AMERICAN Robyn Puckett has become the first international player to win the Australian Women’s Senior Amateur Championship after a week of closely contested golf at the Commonwealth Golf Club in Melbourne.

The Australian-born Puckett defeated Queensland’s Josie Ryan in the final on Friday 3&2.

Puckett easily accounted for defending champion Sylvia Donohoe with a 6&4 win in her semi-final on Thursday. The American came through the two stroke play rounds as the top qualifier.

“It’s been such a great week and everyone has made me feel so welcome,” Puckett said.

“The level of sportsmanship this week has been fantastic and hopefully I’ll be able to come back next year.”

The final match was square through the front nine before Puckett won holes 10, 15 and seal victory with a par putt on the 16th hole.

Despite the loss, Ryan finished top of the Australian Women’s Senior Ranking System for 2010.