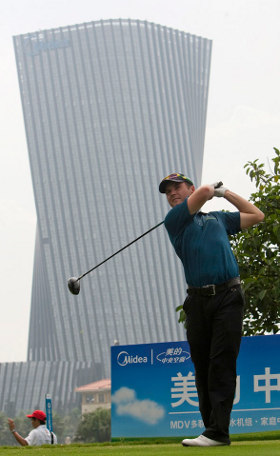 Griffin is among several Australians who travelled to Shunde from Scotland after competing in last week’s Alfred Dunhill Links Championship, but he shook off jet-lag with an eagle and eight birdies in a lively round that also included two double-bogeys.

Teeing off at hole 10, the 27-year-old started with a birdie, eagled the par-five 13th and double-bogeyed 14.

He then soared to the top of the leaderboard at seven-under with birdies at 15, 18, one and a hat-trick from holes three to five, but doubled the seventh before joining Kennedy as a clubhouse leader following a birdie at the par-five ninth.

“I’m rapt. It was a really good round. I’m only disappointed with the two double-bogeys, but I can’t really complain as I holed a lot of putts, so it probably all evens out,” said Griffin, who finished joint fifth in the Thailand Open in August.

The Midea China Classic is the eighth of 10 OneAsia events in the circuit’s second season.

Along with large contingents from China, Australia and Korea, the field includes six players each from Thailand and Chinese Taipei, five from New Zealand and a further eight nationalities.

The China Classic is receiving (somewhat erratic) coverage on ONE HD. (Someone should tell Ten it is a Commonwealth Games event and they’ll screen it live on all channels.)

Published schedule at time of posting:

Saturday: 1am – 5am, Second Round China Classic