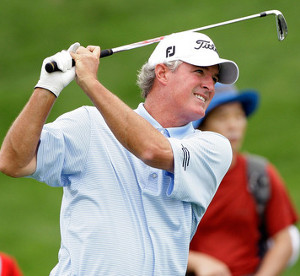 AMERICAN senior golfer Russ Cochran has just claimed his second straight US Champions Tour title, declaring that at 51 he is “still learning how to win.”

Cochran shot a one under par 71 yesterday for a two-stroke victory over Tom Pernice Jr. in the SAS Championship in Cary, North Carolina.

The left-handed Cochran won his lone regular PGA Tour title in 1991 at the Western Open – the only win in what was an extensive career.

Cochran finished at 14 under at the Prestonwood Country Club yesterday, a wire to wire win after shooting 64-67 the first two days and going into the final round with a four-stroke lead.

“I’m not used to a big lead, so I didn’t know what to expect,” he said. “I found out that you just need to play well regardless. It’s not like I was ever a great winner. I’m still learning how to win right now.”

Collecting the US$315,000 winners cheque should aid the process.

Australia’s Peter Senior again performed well, birdying the final two holes to finishing on 7 under and tied for 19th place.