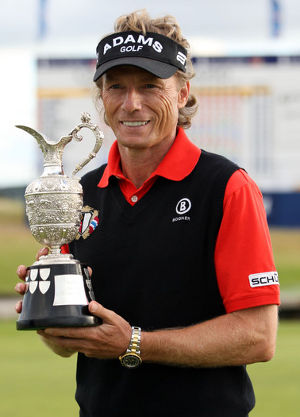 Senior began his day strongly with three birdies on first four holes to put himself right in contention but the ever challenging Carnoustie course caught up with him when he bogeyed the 10th.

Senior finished equal third on 68 alongside American trio Fred Funk, Jay Don Blake and Russ Cochran and is now almost certain to gain full status on the US Champions Tour next year.

It was the first Major in the senior ranks for Langer after many successes since turning 50 three years ago. The German won his second Green Jacket at Augusta National in 1993.

Langer began the day three clear of Pavin but his playing partner held on doggedly.

When Pavin birdied the 11th there was just one shot in it but by the 18th Langer had the luxury of a two stroke lead.

Langer finished with a one-over 72 to end at five-under, one better than the American, who finished his first Senior Major with a round of 70.

The next best Australian performances in Scotland came from Wayne Grady and David Merriman who finished in a tie for 50th position at 13-over.