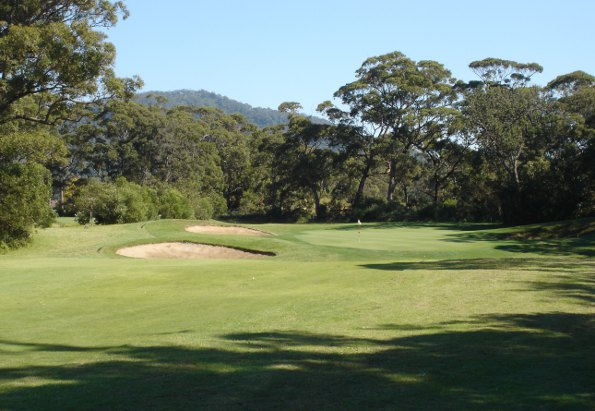 YOU constantly hear the waves crashing on the magnificent Seven Mile Beach as you play the Shoalhaven Heads Golf Course but you never get a glimpse of the water.

That’s because even though the beach is just a few score metres away over the sand hills there is quite heavy coastal bushland blocking the view.

In some places that might be a negative but here it is not.

With the beach running the entire length of the eastern side and national park bordering the north the Shoalhaven Heads course has been literally carved out of the coastal scrub.

For the vast majority of your playing time at the course you are fully enclosed by the bush, with only the crashing waves to the east and Mount Coolangatta peaking over the trees to the west to remind you your location is a strip of land a couple of hours south of Sydney on the NSW coast.

The rest of the world could be a million miles away, and on a golf course that is definitely a plus.

In fact, on many of the holes the bush marks the out of bounds areas, giving you even more of the feeling you are fully enclosed in a little golfing paradise.

As for the playability of the course itself, it seems to have many instant converts and I ended up there largely because of the very positive word of mouth it kept getting (from fellow south coast golfers) about its continued development.

And that is a proviso here: the course is currently only 15 holes so in effect the first three holes are played as is twice. Negotiations, planning and financial efforts are underway for the remaining holes.

Though it is an easy walking course with no dramatic geographic features (apart from its actual location) very thoughtful design has made it constantly interesting to play.

Many of the fairways are undulating, there is extensive well placed bunkering and the coastal scrub means keeping straight is often the only option.

A key feature are the very large, undulating and hard surfaced greens that make putting a challenging delight.

Not super quick on the day I played, but often the opportunity for some very long putts on contoured but very true putting surfaces.

All in all Shoalhaven Heads is an interesting course for all ages and abilities but with no big hills to climb and not overly long it does suit older golfers to a tee.

I played in the weekly Thursday morning veterans competition that usually attracts 80 to 90 men (and a growing number of women).

The Shoalhaven Heads township is an unpretentious holidaying destination with a great golf course, seven miles of glorious beach, good fishing in the Shoalhaven River and a number of local wineries and other attractions.

There are numerous caravan parks and other accommodation options.

Golfing tourists can also try other interesting nearby courses such as Nowra with its unique hillside tees and the very picturesque and enjoyable Jamberoo.