WITH both personal and golfing heroics, Phil Mickelson has won his third green jacket at the US Masters today.

The extended hug with wife Amy afterwards perhaps said it all.

This was more than just about sport. It was about remembering to savour the special moments in what is a transient life.

Mickelson, wearing a pink ribbon on his cap to acknowledge the fight his wife and mother daily undertake against breast cancer, seemed to spend an awful lot of the final round at Augusta National hitting out of the pine trees.

In a day that started with Englishman Lee Westward one stroke in the lead and the returning Tiger Woods looming ominously a few strokes back, Mickelson was at his nerve wracking best.

His daring shot from the pine needles on the 13th was touted as perhaps the best of his career.

With the lead on the line, and seemingly blocked by a tree and with only a few feet of gap, Michelson hit it 204 yards, over Rae’s Creek, and within three feet of the hole.

It was one of those classic Mickelson shots when you are internally screaming “Don’t do it Phil” and you think he is moments from disaster, only for him to pull off the miraculous. 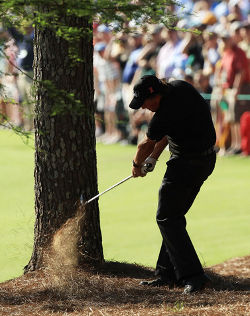 Despite all the pine cone exploring and the clutch pars, it says on his card there were no bogeys and five birdies.

A final round 67 that saw him finish at 16 under, three ahead of the hapless yet again major runner up Westwood.

With a seven under final round Anthony Kim was third, a struggling Tiger Woods tied for fourth with the usually unflappable K J Choi on 11 under, and a constantly threatening but never quite there Fred Couples next on 9 under.

There were visible tears from the Masters winner as he hugged Amy for an extended period in front of the large 18th green crowd and worldwide television audience.

“It has been an emotional year,” he said later. “I’m very proud of the fight and struggle she has been through. It has been very difficult and very emotional. To be on the other end and feel the jubilation is incredible.”

On the other hand, if one expected Woods to be gracious in defeat and happy with his fourth placing after his five months layoff, then one would be disappointed.

Perhaps you don’t get to be a champion like Woods by accepting anything less than victory under any circumstances.

“I finished fourth. Not what I wanted,” Woods said after finishing with a final round 69.
“As the week went on, I kept hitting the ball worse. I only enter events to win. I didn’t hit it good enough. Consequently I’m not there.”

Woods said he was going to “take a little time off and re-evaluate things”.

Scott an eagle, Green a hole in one

There were some moments of joy for the Australians but for extended happiness they will have to ponder the positives of competing and look to next year.

Adam Scott sinking his approach shot for eagle on the par-4 seventh hole – an Augusta special that seemed to sit there for a while, then agonisingly slowly take a very leisurely and circuitous route several metres down to the hole -and Nathan Green acing the 176-yard par-3 16th hole were the highlights.

Scott was the best of the Australians finishing with a share of 18th place at one-under, Geoff Ogilvy carded a 74 to finish one-over for the tournament, Robert Allenby finished at 10-over while Nathan Green had the ace, two eagles, five bogeys, a double and a triple in a topsy turvy final round three-over 75 and a tournament total of 14 over.