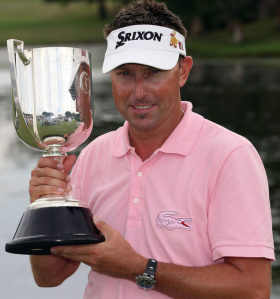 ROBERT ALLENBY has cruised to a four shot win at the Australian PGA Championship at Coolum with a second straight five under par 66 to finish at 14 under.

Wearing what this year has become a final round tradition for him – a pink shirt in honour of his departed mother Sylvia – Allenby never really gave the field of Australian golf stars snapping at his heals a look in.

Allenby now joins an elite group of Australian goflers with with four or more PGA Championships, including the likes of Kel Nagle, Norman Von Nida and Bill Dunk.

He had already claimed the Kirkwood Cup in 2000, 2001 and 2005, the last time when he bagged the triple crown of Australian golf with wins also in the Australian Open and Masters.

A week after ending a four-year title drought by defeating Henrik Stenson in a play off at the lucrative Nedbank Challenge in South Africa, Allenby’s late decision to add the PGA Championship to his schedule paid handsome dividends as he grabbed five birdies and never surrendered the lead on the final day.

“I did what I had to do, from the first hole to the last hole,” an elated Allenby said.

“I knew I had some very, very tough competitors behind me and I had a lot of respect for them.”

“And that’s what I did all day, I just felt totally in control on every shot.”

“It’s a nice feeling to win in that fashion … and the birdie at 15 was nice and then obviously the birdie at 17, it’s always nice to come down the last with a four-shot lead.”

“I was pretty consistent but to do it under the gun in the final round, that’s pretty special.”

2006 Australian Open champion John Senden and 2009 Volvo China Open Champion Scott Strange – who finished third last year – had to settle for a share of second at minus-10, Senden closing with a 67 while Strange shot 69 and Victorian Marc Leishman closed with a 68 for outright fourth at nine-under.

Topping off massive year where he claimed three Nationwide Tour victories to earn an immediate promotion to the US Tour, Sim’s result earned him the 2009 Norman Von Nida Order of Merit Medal for topping the money list, which also brought him entry into the 2009 Open Championship.

“Obviously this Order of Merit title gets me into the World Golf Championships events in the (United) States and I think my world ranking’s going to get below 50 which is going to get me into the (US) Masters next year,” Sim said.

“It’s been a big season, I’ve had three wins on the Nationwide Tour and I’m really looking forward to an exciting season next year.”