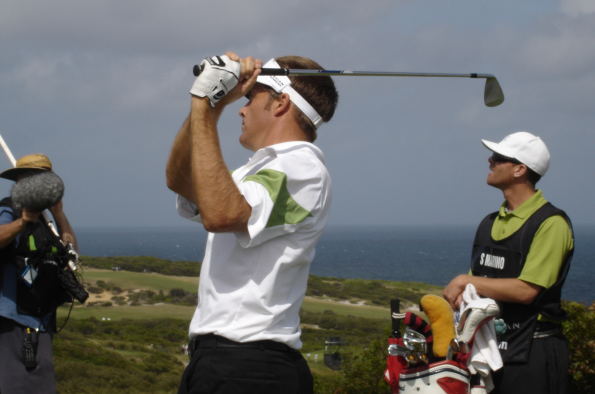 STUART APPLEBY hesitated when asked if he had been “in the zone” when playing a remarkable 66 in brutal conditions during a windswept second day at the Australian Open.

The six stroke tournament leader considered the suggestion for a few moments before deciding no, when you’re in the zone you are oblivious to everything around you and have no worries or concerns, and he had had quite a few.

“I’m swinging well – I wouldn’t say I was in the zone though,” Appleby said.

Not the least of his stated concerns was the preparation of the greens. Appleby – and a number of other leading players – contended organisers should have left more up their sleave to deal with winds which could only have been considered likely at some stage.

When winds gusting up to 65 kph did come on Friday morning – and balls starting shifting on greens – play was shut down from 8.30 for five and a half hours.

“They wasted a lot of guys’ time and had nothing to show on TV,” Appleby said.

Tournament Director Trevor Herden was adamant all that could have been done was done, and strongly defended the technical green preparation decisions.

“No matter where you were today you wouldn’t be able to play with those winds gusts,” he said, citing Royal Melbourne and Kingston Heath.

Appleby sat in the same media conference seat some hours later and disputed those decisions, but he couldn’t have been happier with his own golfing response to the conditions.

The relentless wind meant more than half the field failed to complete their second rounds.

And as all around him players faltered, Appleby was sublime.

Marino himself struggled to a two over par 74 and sits on nine over for the tournament.

The wind also played havoc with the swing of the third member of the group, Greg Chalmers, who battled away in his usual grinding style to an even par 72 and at two under is actually in second place of the handful who have finished their second rounds.

“When a player has the control Stuey had over the golf ball, it really is a joy to watch,” Chalmers said. “He knew exactly where it was going, and has played flawlessly for two days.”

Appleby parred his first two holes before the suspension and then came back with five birdies and an eagle for his second successive 66.

“I played well today. I got up and down at the right time. I did enough good things today to produce the round and I guess you could call it capitalising. I’m playing well, but there’s a lot of golf tournament left. The course will make you accountable so you have to be wary about it.”

As Appleby said, “wind is your biggest opponent on this course.”

Much will depend on the conditions faced by all those resuming their second rounds when play gets underway at 6.30 on Saturday morning.

Adam Scott, who has 12 holes to play in his second round, sits in outright second at six-under, one clear of overnight leader Scott Hend and Peter Wilson, who are also yet to complete round two.

Nick O’Hern and American David Oh are a further stroke back.

James Nitties, who began day-two one shot of the pace, struggled to two-over par through six holes to sit in a share of seventh place alongside Aaron Baddeley who fired two birdies and an eagle in six holes to move back into contention at minus-three overall.

Peter O’Malley signed for a 74 but is well placed at one-under alongside seven players in a share of 14th.

John Daly remains at even par through six holes alongside Michael Sim, while veteran Scott Laycock will be around for the weekend after firing an impressive three-under 69 to finish at plus-one for the championship.

2007 Stonehaven Cup winner Craig Parry bounced back from an opening 80 posting the second best round of the day – a five-under 67 – to sit inside the cut-line at plus-three overall.

Meanwhile, pre-tournament favourite Geoff Ogilvy faces a nervous wait after posting a disappointing 76 to fall to plus-five, while 2006 winner John Senden is also on the outside looking in after posting a two-over 74.