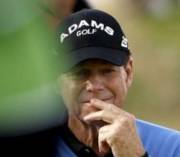 TOM WATSON’S heart stopping performance at the British Open this year has led to the Royal & Ancient rethinking its age exemption rules.

The 60-year-old five-time Open champion finished runner-up this year but would have lost his exemption status because of the R&A’s age rules.

But golf’s governing body said yesterday it had amended one of its rules so that former champions who finish in the top 10 in the previous five Opens get a five-year exemption, regardless of age.

“We have introduced this exemption as a direct response to seeing two of our great Open champions (Watson and Greg Norman), both in their 50s, challenging to win our championship these last two years,” R&A chief executive Peter Dawson said on Monday.

“We rightly reduced the age of exemption for past champions from 65 to 60 two years ago and our intention was never to remove players still at the top of their game from competing in the Open.”

The R & A had not contemplated a 59-year-old leading the Open Championship going into the back nine on the final day.

Two time championship winner Norman, who turns 55 in February, will have five years to secure a top ten finish and extend his exemption. The Shark tied for third at the 2008 Open.

The Open will celebrate its 150th Anniversary when it returns to St Andrews next year.