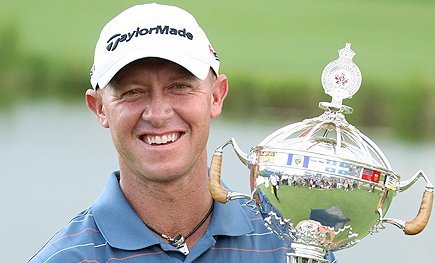 POPULAR Australian golfer Nathan Green has broken through to win his first US PGA Tour title.

Green beat South African Retief Goosen in a sudden death play off to take what was a rain-plagued Canadian Open.

The tournament ended up taking five days and 74 holes on a soggy and at times unplayable Glen Abbey Golf Club course but it didn’t bother the 34 year old Australian.

“It’s a huge surprise to finally win,” said Green, originally from Newcastle.
“This is where I started my pro career. I love coming up here. The people are great.”
Green collected $A1.1 million for the win, his first since a European tour victory (New Zealand Open) in December 2006. Green climbs 140 places in the Official World Golf Ranking to 150th.

“I am over the moon,” Green enthused, saying the win meant “everything” to him.

“I probably wasn’t working as hard as I should have been earlier in the year but I sort of knuckled down the last few months and didn’t feel like I was getting any reward for it,” he said.

“I’ve never been really good at closing out events. I’ve had a lot of good chances, and lost in the last round, but for me, this event was pretty much — sort of a little bit make or break. I’ve had some good chances this year and really folded badly in the last one or two rounds, and that was my thing today, just don’t!”

“I went out there and I couldn’t afford another slip up. I had to do something quickly just to make sure I’ve kept my card for this year, and went out there, and the one benefit for me was I think being able to go straight from the third round into the fourth round. I didn’t have to sleep on it.”

“It’s just such a buzz for me to be able to turn the year around so dramatically. That’s more than I thought I could have done.”

Four days of stormy weather which resulted in more than 10 centimetres of rain dumped on the course forced the event to be extended into a fifth day.

Green and Goosen, a two time US Open champion, both finished on 18 under after four rounds of regulation play, posting final rounds of 68 and 69 respectively on the par 72 course.

Green took the title on the second play off hole when Goosen missed a nine foot putt to save par.