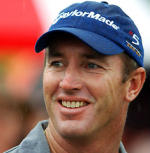 IT’S GREAT to see Australia’s Peter Lonard back leading an international golf tournament after his 5-under 66 has him sharing the top of the leaderboard at the US Nationwide Tour event in Colombia.

The 44-year-old has had his share of injury and other career hiccups in recent years but is off to a great start for 2012.

Lonard shares the lead of the Nationwide Tour’s opening event of the year, the Pacific Rubiales Colombia Championship at the Country Club of Bog0ta, after the first round along with American’s Brian Smock and Billy Horschel.

Lonard underwent knee and hip surgery last year and only has conditional status on the Nationwide Tour for 2012, but still hopes to get one more shot on the PGA TOUR, where he averaged 26 starts a year from 2002-09.

“I’m no spring chicken and there comes a time when you have to decide whether you’re going to keep going or you’re not,” he said after his round.

“I suppose this is a make-or-break year. I’m not getting any younger. We’ll see how we go this year. Obviously this year is the only year I’m interested in at the moment. If I have a really bad year then I’m probably done but I’d like one more shot at the main tour.”

There is a big pack of Aussie golfers competing in the event with Bronson La’Cassie the next best placed at 1-under.