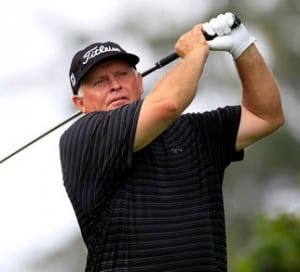 PETER SENIOR has begun his 2012 US Champions Tour campaign in familiar territory – again just a whisker away from his first win.

The 52-year-old sunk a birdie putt on the 18th hole to force a playoff against Corey Pavin at the 2012 Allianz Championship at Broken Sound Golf Club in Florida but couldn’t match it the second time around.

“I putted awful all day,” Senior said. “I was happy to make the last one to get into the playoff, but I don’t think I’ve ever left so many putts short in my life.”

Pavin too was shooting for his maiden Champions Tour win and hadn’t tasted success anywhere in more than five years, dating back to the 2006 U.S. Bank Championship of Milwaukee, a stretch of 122 tournaments. This was his 35th start on the Champions Tour.

“It’s been a long time,” Pain said. “But I’m always more comfortable trying to win a tournament than trying to finish fifth or sixth.”

Whilst it was the 12 foot birdie putt he rolled in on the first playoff hole that won him the tournament, his left-handed chip from inside some sort of drain beside the 14th tee will be long remembered.

“That was a once-in-a-lifetime shot,” Pavin said. “I can’t think of a better up-and-down I’ve had in my career. It’s not like I practice turning 8-irons over and hit them left-handed. When that happens, you think you’re going to win, but I had to get that thought out of my head.”

Pavin and Senior both shot a final-round 71s to finish tied at 11-under in regulation.

Senior had three runner-up finishes in 2011, including two play-off losses. As we’ve said many times more than once before, that first win can’t be far off.