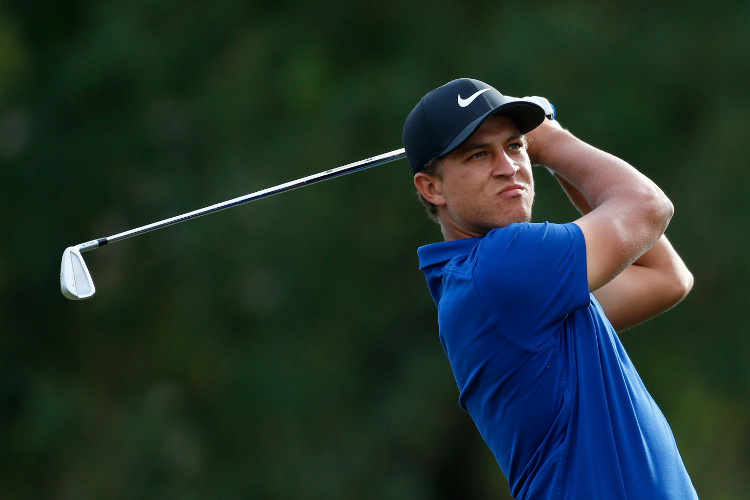 Champ, the longest hitter in professional golf, will compete in his first tournament down under at the #AusPGA at RACV Royal Pines Resort on the Gold Coast on 19-22 December.

The 24-year-old Californian star says he’s elated to take part in one of the sport’s most prestigious tournaments.

“I can’t wait to head to the Gold Coast and finish the year playing against some of the world’s best,” Champ said.

“I’m sure there will be lots of local hype after the Presidents Cup and I’ve heard great things about the golf course, as well as the fun atmosphere surrounding the event. I am really looking forward to trying to win the tournament.”

Champ, ranked no.71 in the world, is regarded as one of the PGA TOUR’s brightest prospects, with his long-ball driver a popular drawcard with fans.

PGA of Australia CEO Gavin Kirkman said Champ’s participation at the PGA Champs strengthens what’s set to be one of Australia’s strongest ever summers of golf.

“Cameron Champ is a shooting star of the PGA TOUR. His booming drives will be a key feature of the fun of the Australian PGA Championship,” Mr Kirkman said.

“I can’t wait to see him strike the ball from the first tee at RACV Royal Pines Resort. There’s no doubt he’ll be a crowd-puller and add to the festival atmosphere that we’ve developed at the PGA Champs.

“Champ’s participation in our event punctuates what’s going to be an incredible summer of golf. It follows a star-studded Australian Open field and excitement around the Presidents Cup. Golf is set to be the sport of the season.”

Few players have made as big an impact as Champ in his first two seasons on the TOUR.

Champ last month won the Safeway Open in an emotion-charged performance. It follows his life-changing victory at the Sanderson Farms Championship last October.

“Cameron has just won on the PGA TOUR and is one of the rising stars of world golf, so to secure him for the Gold Coast is a huge coup and further strengthens what is already a world-class field,” she said.

“The Australian PGA Championship is renowned around the world for attracting the world’s best players and this year’s event will be no different, so I encourage as many people as possible to get out and see the players in action.”

The Texas A&M graduate will have to overcome local heroes Smith and Scott to return home with the Joe Kirkwood Cup – Australia’s oldest pro golf trophy.

Smith is hoping to create history by becoming the first person in more than 100 years to win three consecutive Australian PGA Championship titles.

The Australian PGA Championship is a week-long festival of golf, with plenty of action-packed, family-friendly activities to entertain fans beyond the ropes.

The famous Gold Coast beaches will again be brought to the greens, with the Oakley Gold Coast Beach Club taking centre stage at the lucrative 16th hole, the home of the Soniq Million Dollar Hole (SMDH).

The SMDH is moving to Saturday this year where a group of lucky fans will have the opportunity to try their luck at hitting a hole-in-one on the par-3 hole to win $1 million.

The players will be competing for AU$1.5 million in prizemoney, and as the Australian PGA Championship continues to co-sanction with the European Tour, players have the opportunity to earn valuable world ranking points early in the 2019/2020 season.

Channel 7 is the exclusive domestic broadcast partner of the Australian PGA Championship.

Photo courtesy of PGA of Australia