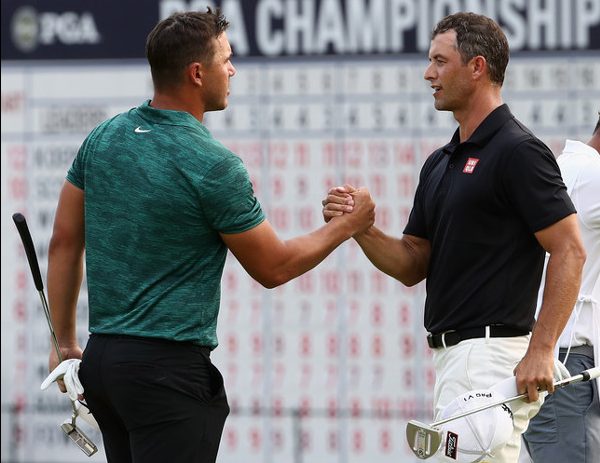 BROOKS KOEPKA captured his third major at the 2018 US PGA Championship in a compelling final round that saw huge crowd support for a resurgent Tiger Woods, and for Aussies, an inspiring near miss by Adam Scott.

The 28 year old Koepka had the roars of the a record St.Louis crowd – mostly for the 42 year old Woods (and maybe a few for Scott) ringing in his ears coming down the stretch at the Bellerive Country Club but remained his apparent unflappable self to beat off his much more experienced challengers with a closing 4-under 64 to finish at 16-under overall.

Koepka won what was his second major of the year by two strokes after going back to back with the US Open at Shinnecock Hills in June.

The American – who has three majors but just one other win on the US PGA TOUR – credited his “focus” for his performances, saying “for some reason the majors get my attention.” He now has three major victories in just six starts.

Koepka and 2013 Masters winner Scott (67) played together in the final round Sunday with the Aussie drawing level on 14-under with five holes to play.

From holes 7 to 13 Scott holed 5 birdies and admitted later he had “high hopes” in the closing holes of becoming just the third Aussie to win two different major championships.

Unfortunately Koepka just doesn’t give in and with birdies on 15 and 16 pushed Scott to some errors on 17 and 18 that saw a bogey on the last and a 13-under total.

It was a bit of a strange final round with hordes of media and photographers crowding the Woods pairing but the final two going almost unattended.

You maybe can’t blame them with 14 time major champion Woods finally displaying most of his former talent and fighting focus to be a genuine contender after his years in the wilderness from injury and personal conflict.

Despite not finding a single fairway on the front nine Woods managed to scramble four birdies opposed by a single bogey.

He found some fairways on the back though and had the same four birdies to one bogey ratio, including a long birdie putt on the last that elicited one of his classic fist pumps. He finished with a 6-under 64 to be just two shy of Koepka and one in front of Scott.

That final performance – and the final fist pump – will no doubt be spoken of endlessly leading up to the next major – the 2019 US Masters. Maybe Scott’s resurgence might get some treatment back home as well.