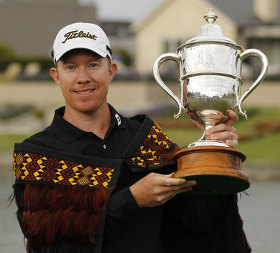 In a dramatic final day both Aussie golfers did their best to lose the event at the Clearwater Golf Club while in third spot New Zealander Josh Geary was desperate to end his country’s winning drought at their national championship.

After a great rookie year on the Japan Tour, journeyman Kennedy went into the tournament as the highest ranked player and was three strokes ahead as the final round began.

Kennedy got off to an unconvincing start and saw his lead diminish as an on-fire Parry scored four birdies in six holes.

“I got off to a shaky starts and I let a couple slip through in the early stages,” said Kennedy, who was chasing his second professional win.

“I saw that Craig had it to 9-under on 14 so, I had then became the chaser, and got more aggressive.”

The 37 year old looked dead and buried nearing the end of his round until Parry found water on his 18th hole and ended up with a double bogey, forcing the playoff.

“The playoff was great, to play against someone like Craig and to win holing a putt for birdie was fantastic,” he said.

“To win a national open is right up there. To win a New Zealand Open, with all the names that are on the trophy, it’s one of the oldest opens is pretty special to me.”

Kiwi Geary was hugely disappointed in not ending the national drought with his final round 72 putting him at 6-under, just one stroke short of the playoff.

“I am definitely gutted,” he said. “What is done is done, you can cry for a few hours but it’s not going to change what happened.”

Australian Jake Higginbottom finished the event as the leading amateur and was awarded the Bledisloe Cup for his efforts.