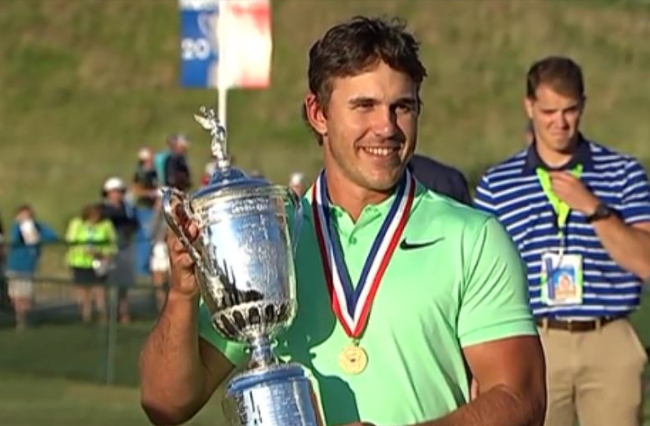 BROOKS KOEPKA was a name we used to occasionally notice on European Tour leaderboards and it was only the little American flag next to his entry that made him stand out a little from many of those around him.

Without that little American flag we might have assumed he was maybe another one of those pesky South Africans – shows you how useful assumptions are.

We didn’t know much about the 27 year old Florida native.

So many names get thrown up in the various professional golfing tours around the world you don’t always get to look up everyone’s career details – particularly when there is so much emphasis  on the players who are embedded in the world top five or six, the McIlroy’s, Day’s and Spieth’s of the world.

Well, after the 2017 US Open at Erin Hills in Wisconsin, we know a whole lot more about Koepka. Particularly that he has one hell of a golf game.

It has probably helped that overall game a lot that after leaving his Florida college he didn’t follow the tried and tested path of many of his promising young golfing contemporaries and stay at home.

Koepka travelled the world. Playing first on the secondary European Challenge Tour, before graduating to the full European Tour.

He had four Challenge Tour victories before a one stroke victory at the 2014 Turkish Airlines Open.

His name has become much more prominent in the last couple of years after he returned to the US and won his only previous US PGA TOUR victory, the 2015 Waste Management Phoenix Open.

A fourth at the US Open three years ago and a place in the US Ryder Cup team last year pushed him further into the limelight.

Going into the final round Sunday in a very crowded leaderboard with a record number of US Open low scores Koepka said he would never be as nervous as he was playing the Ryder Cup, and his calm demeanour certainly stood out.

Koepka couldn’t have had a better start, birdying the first two holes and then potting another on 8.

He broke away after the 12th hole when Brian Harmon, his co-leader at that stage at 12-under, had two very unwelcome bogeys.

On the 18th he split the fairway off the tee with a 380 yard three wood, but in the end only managed par for a closing round of 5-under 67.

That was still enough to match the 16-under record score set by Rory McIlroy at Congressional in 2011.

He also became the seventh straight debut major winner, a sequence that goes back to Jason Day’s victory at the 2015 US PGA Championship.

Koepka spends a lot of the time in the gym, on the course and hanging out with good mate Dustin Johnson (the defending champion missed the cut) and has a similar game – big power hitting matched by an increasingly deft short game.

His final round was amazingly consistent, with him putting for birdie on every hole except the par three13th, where his 8 foot par putt was maybe as important as any of his six birdies. It saw him consolidate his lead over a tiring Harmon.

“I needed something to go in and see that to build momentum off it, and just carried that over,” Koepka reflected later.

Outwardly he seemed totally composed, with only a slight fist pump after each of his birdies. It wasn’t after he had won and he was on his way to the scorers hut in a buggy with his new girlfriend, actress Jena Sims, that he buried his head in his hands and let the gravity of it all sink in.

“What I’ve done this week is amazing,” Koepka commented later.

Unfortunately for overnight leader Harmon, who said after posting a 54 hole single stroke lead over Koepka, Justin Thomas and Tommy Fleetwood that he was exactly where he had wanted to be since he was a 10 year old, the final holes were a huge disappointment.

Harmon (72) dejectedly bogeyed the last hole, but shouldn’t feel so bad about his joint runner up finish alongside Hideki Matsuyama (66).

Tommy Fleetwood (72), who finished fourth on 11-under and played alongside Koepka in the final round, is also a Challenge Tour graduate.

“It gives you a good grounding,” the 26 year old Englishman said. “Obviously, Brooks dealt with it amazingly. He came and kicked everyone’s (behind) over there, didn’t he? But he’s proven for a long time how good he is. Now he’s done it in a major.”

The only Australian to make the weekend was Marc Leishman who had a horror Sunday front nine with five bogeys but fought back with three birdies and a lone miss down the stretch to finish in the red at 1-under tied for 27th.

US Open Final Round Highlights Video