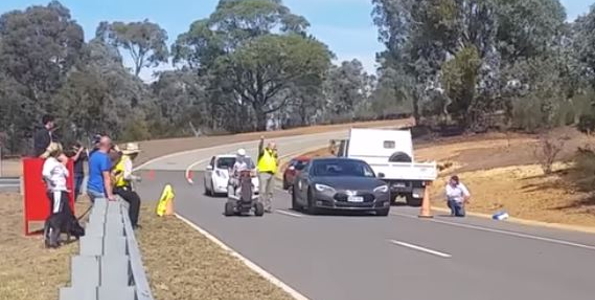 WE thought we needed to inject a bit of seriousness into things this week and this video of a dramatic street race between a FourStar Golf Cruiser and a Tesla car is perfect.

We’re not sure of the legality of letting such high-powered vehicles loose against each other on a public road somewhere in rural Australia but the event certainly attracted a “huge” clandestine crowd.

We won’t spoil the outcome by dwelling on engine specifications or other technical issues before showing the video, but there are some further comments below.

The cruiser in this video was piloted by Mark Hemmingsen, who is setting up the new Electric Vehicles Canberra company, to distribute the popular golfing trikes in the ACT.

“The cruiser was in low (walking) speed of course,” John says, “You saw the runner out in front too, didn’t you?”

“In high speed neither the Tesla nor runner had any chance at all!!!”

Mark wasn’t all that disappointed  – or surprised – by the outcome.

“I can’t resist a challenge, even if it seems futile!” Mark said.

We’ve written about the more traditional use of the FourStar Cruisers – on golf courses – here: Fourstar Golf Cruiser … now an even better way to get around the course