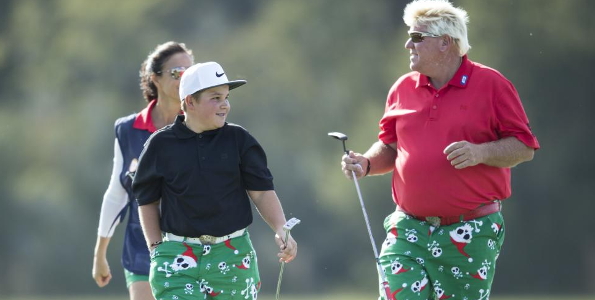 THEY’VE pensioned big John Daly off to the US Champions Tour but it looks like the colourful dynasty will continue with his 13 year old son showing all his dad’s prodigious golfing talents.

Daly junior first picked up a golf club at age two and is already hitting the driver around 250 yards (230m) off the tee and a seven-iron about 150 yards (137m).

The pair showed off their talents – and their partiality for wearing colourful clothing – at the Champions Tour’s Father/Son Challenge in Orlando on the weekend.

“The way L.J. played this week, I’m so proud of him,” Daly said. “He’s been clutch all week. It’s been a great week for me. The progress for him to see it under the gun, the way he performed, it was incredible.”

The pair tied for ninth place at 17 under, four shots behind winners David Duval and his stepson Nick Karavities.

Young John has apparently moved his focus from football and basketball onto the fairways, so the golfing world better be prepared.