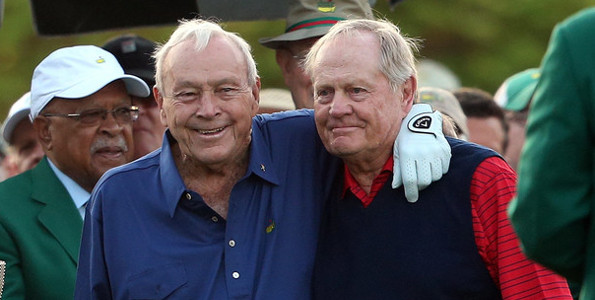 That word “legendary” gets bandied around a lot but in Palmer’s case it might even fall short of the man and his career.

Palmer, know by golf fans the world over er “The King”, passed away in a Pittsburgh Presbyterian hospital in his home state of Pennsylvania. He had been there since late last week after checking in for heart tests.

Palmer won his last major championship in 1964 and his last PGA TOUR event in 1973 but since then his status atop the world of golf has only grown.

Noticeably, at the 2016 US Masters in April, Palmer did not hit his usual ceremonial tee shot alongside long-time friends and rivals Jack Nicklaus and Gary Player. [Pictured above: Palmer with Nicklaus at 2015 Masters]

As Golf.com wrote in this article on the tragic news, Nicklaus spoke about Palmer’s absence with notable sadness, anticipating today’s events.

With Palmer, it was not just his golfing prowess, but his enduring popularity with golf fans worldwide.

As Golf.com noted, Palmer was able to transcend a niche sport and become a genuine celebrity.

Fellow golfer Chi Chi Rodriguez summed it up well in a message he spent decades preaching: “Every touring pro should bow down and pray to Arnold Palmer, for what he did for golf.”

“Arnold was the folk hero of golf.

Not only was he the greatest personality the game has produced, he was King of the fairways every time he played.

We were only two weeks apart in age and great rivals.  We certainly had some wonderful times together.

The last time we played was an exhibition at The Australian Golf Club in Sydney on November 24, 2004.  The occasion was the centenary of the Australian Open and Bruce Devlin joined us for the nine-hole match on the eve of the tournament.

At last year’s Open Championship at St Andrews, we were rival captains in the four-hole Past Champions event and, although our team scores were the same, Arnold’s team won the charity donation by being the older team of the two.

St Andrews was a fitting final place for us both to meet.

Mary and I are terribly saddened by the news of his death, and our thoughts are very much with Kit, and his daughters and their families.

Palmer, who turned professional in November 1954, won 64 US PGA TOUR events and 92 worldwide, including the 1966 Australian Open at Royal Queensland.

He was three times runner-up at the US PGA Championship and had 38 top-10 finishes in major championships including in three US Open playoffs.

Palmer is survived by his second wife, Kit, daughters Amy Saunders and Peggy Wears, six grandchildren, including Sam Saunders, who plays on the PGA Tour.