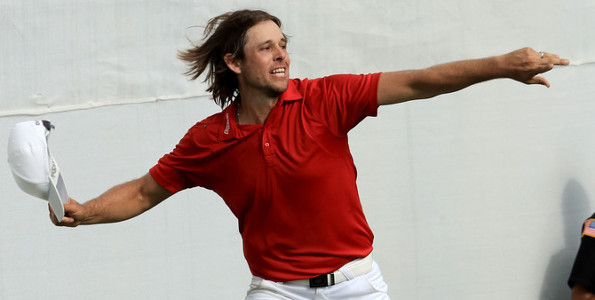 AARON BADDELEY literally jumped for joy after winning the US PGA Tour’s Barbasol Classic in Alabama and getting his struggling career back on track.

The 35 year old has been scratching for starts this year but now has a two year tor exception.

Baddeley hadn’t won in more than five years and was ecstatic at his fourth TOUR victory after four playoff holes with Korean Si Woo Kim.

“I think you could tell by my reaction how much it meant to me,” Baddeley said after he broke into a celebratory dance beside the 18thff the green, tossed his club in the air and flung his cap back onto the green.

“It’s been a long time between drinks … I had some real struggles.

“It’s crazy sometimes … you think it’s not going to happen again … when you think about how difficult last year was,” an emotional Baddeley said.

Baddeley was a teenage golfing prodigy who won the Australian Open as an 18 year old amateur in 1999 and retained the title as a new professional the following year.

Since joining the TOUR in 2003 Baddeley had never missed the FedEx Cup playoffs until last year when his world ranking slumped to a year-end low of No.419.

“This year I’ve been playing on past champion status, asking for invites (and) I’ve never done that before … I probably wouldn’t be sitting

“It’s a relief to plan your schedule, but going forward the confidence you get is pretty exciting, I’m pretty pumped.”

Baddeley’s career seems to have been bedevilled by swing and coach changes and in recent times was talking of needing to bring the “fun” back into his game.