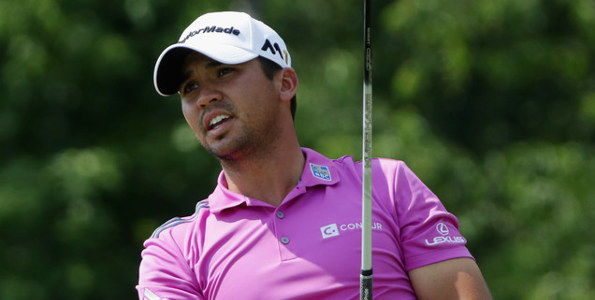 JASON DAY stood on the 17th tee knowing it was all or nothing.

As it turned out, in a year of “all”, the “nothing” finally had its wicked way with the world No.1.

“I had to push,” Day said after assessing his then three-shot deficit to eventual US Open winner Dustin Johnson.

“You can’t win tournaments just laying up there. I had the opportunity to go out there and give myself a shot at winning the tournament.

“I hit a great drive. Unfortunately, it didn’t work out.”

Day’s tee shot on the driveable uphill par-four came within 1m of giving him an eagle try, but hit the top of a cavernous bunker wall and trickled down to its floor.

With the pin tucked in the opposite corner of the treacherous green, Day again went for glory only to see it trickle into a second trap.

Just as he’d done in taking a six on the par-four seventh hole in his costly opening-round 76, he left his next blow in the sand and ultimately signed for the same double-bogey six.

“I had to hit a really good one … because it’s a long way up that hill to the front of the green,” he said.

“I hit a great drive. I honestly did. We were aiming just left of the towers and hit it right on my target and kind of sort of kicked right and then down the bottom of the bunker, just a little bit on the down slope.

“It was down-sloped towards (the wall) and you’ve got to get underneath it with speed and to try and get it high and soft.

“Unfortunately, I just hit it fat and obviously, the rest was history from there.

“It took the wind out of my sails.”

Day had hovered without progressing from his one-over starting point for much of the afternoon.

But a bumped sand wedge for eagle on the long 12th ignited a run that threatened to produce a second major championship.

“But it is what it is. I’ve got to understand that these things happen for a reason.

“I’ve just got to understand that and not be too disappointed, because where I was sitting after my first round, shooting six over par to where I am now, trying to fight my way back in and giving myself an opportunity at winning, especially on a U.S. Open course, it takes a lot of grit and a lot of oomph to get there.

“Unfortunately, I didn’t quite make it.”

Scott made an early birdie off his two-over starting base, but was still at that mark when he began pushing on the back nine.

But bogeys on 13 and 15 took him from contention and he later said he felt like the double-bogey on the 18th was a closing “kick in the nuts” from a course on which the birdie charges both Queenslanders needed were incredibly difficult to both kickstart and maintain.

Scott ultimately signed for a 74 and a six-over finish to tie for 18th with fellow Australian Marc Leishman.

It was Scott’s fourth top-20 US Open finish in the past five years.

Remarkably, Day’s eighth place was his fifth top-10 in six US Open starts.