WHEN five time Open Championship winner Peter Thomson was a youngster his mum dragged him along to a factory hoping he’d get a “proper job”.

Thomson didn’t get past the front door – he didn’t like the smell.

Growing up in Brunswick in Melbourne after his father had left during the Depression, things were tight. Thomson becoming one of Australia’s greatest ever golfers wasn’t on anyone’s radar.

“And – well as I say, eventually, she recognised that there was something in it and that I wasn’t so destitute.  In fact, I bought the house that she lived in – for her.”

The recollection is part of a fascinating interview conducted with Thomson as part of Victoria University’s 2016 Centenary celebrations.

Thomson was a student at Brunswick Technical School and went on to Footscray Tech, the current university’s early predecessor.

In the video above, Thomson talks about growing up on Royal Creek public golf course, his early life and the start of his professional career.

It isn’t all about golf but gives a great background to the man.

Thomson says his first paid job was a golf ball tester with Spalding, hitting balls into a net 20 times and then seeing if they’d held up to the punishment.

Also part of the job became some odd experiments with golf ball improvements.

“The centre of the golf ball has a little fluid sack in it,” he says. “And this sack had a chemical in it or a substance in it that was what it was.  And it was the thread that was bound around it that got it up to the size it is.  Well, you know, my job was to try out alternative things because this particular substance and chemical was getting to be expensive and rare.  And so I was sent out to find a substitute.  Well, I tried strawberry jam and honey [laughter] and a few other things and they didn’t make a damn bit of difference about the merit of the golf ball, what was inside it.  I still – you know, I still chuckle and laugh about all that.”

Thomson also reveals the path he took to the professional ranks, playing exhibition matches with the then much more experienced Norman von Nida, and then South Africa’s Bobby Locke.

As we said, a fascinating interview and well worth a look.

Also a shout out to Aussie Golfer, where we first saw the video.

There’s a full transcript of the interview here 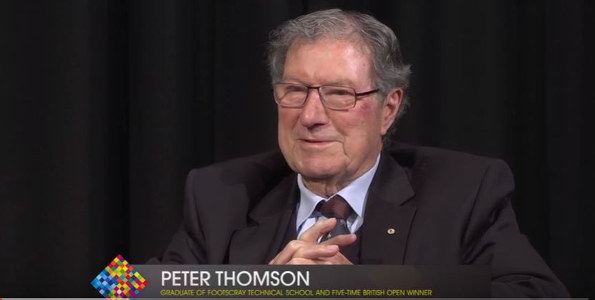