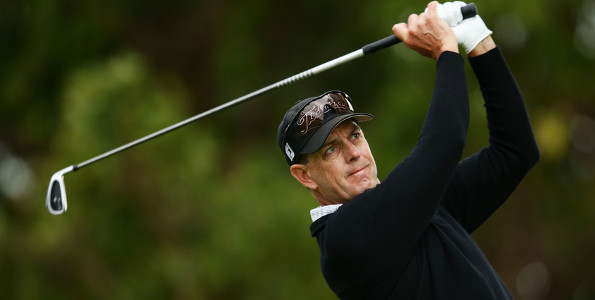 STEPHEN LEANEY has a golfing career that spans the globe but it is always special when he returns for his native WA Open.

That is even more so the case this week as the 47 year old celebrates the 25th anniversary of the win that started it all.

Leaney, born in Busselton in the south-west of Western Australia, was a 22 year old amateur when he announced himself to the golfing world with his first big win.

“It was certainly a great win and I still think about it occasionally, more so at times when I come back to play the WA Open,” Leaney said this week.

“I can still recall the scores that I had. I shot rounds of 65, 66, 68, I think I had a five shot lead starting the final round with Glenn Joyner and lost the entire lead in six holes.”

“After six holes I was 5-over for the day and then I birdied the next six holes. It was just one of those days.”

“I think if I had lost that tournament, it’s hard to know, but I am not sure I would have had the career that I have.”

Leaney is commemorating the milestone by playing the first two rounds of this year’s edition of the Nexus Risk TSA Group WA Open alongside Wayne Smith, who he also played with in the opening rounds all those years ago.

“I played with him the first two days so it will be a little bit of déjà vu when we tee it up again on Thursday,” he said.

[quote]It’s amazing how much water has passed under the bridge but I am sure we will talk about it over the next few days and have a bit of fun.[/quote]

“It’s amazing how much water has passed under the bridge but I am sure we will talk about it over the next few days and have a bit of fun.”

Leaney went on from his 1991 win to represent his country, including the 2003 tied Presidents Cup, win four European Tour titles, a further eight PGA Tour of Australasia titles including the WA Open four more times and compete in 18 Major Championships, highlighted by a runner-up finish at the 2003 US Open.

“The WA Open was probably one of the turning points of my career. I was still an amateur at the time and it really proved to me that I could compete against Professionals. It doesn’t seem like 25 years, a lot has happened in that time but when I think about it it was one of my career highlights for sure,” he said Leaney.

“Obviously the wins stand out but more so the times when you get to represent your country. I have played in two Dunhill Cups at St Andrews, which aside from the President’s Cup, is the main highlight. You get to wear Australia on your jumper and you don’t get to do that very often.”

Since winning the WA Open title as an amateur, only one other player has achieved the feat; fellow West Australian Oliver Goss in 2012.

“Ollie is still only young but he has a very large pool of talent to draw from, he is a very good player.”

“He is over playing on the Web.com Tour in the US, he has had a couple of good results but like most young guys the hardest thing to do is break through.”

“I am sure that having had that win as an amateur he can always draw on that as confidence. He is certainly one of the young Australians to watch over the next four or five years.”

Leaney believes there are a number of promising amateurs coming through the ranks in Australlia who have what it takes to win on tour.

“There is not the same fear now playing in a Pro tournament as there was 25 years ago when I played. You felt like you didn’t belong there with the Professionals but nowadays these guys come through, they are trained very well, they all have sports physiologists, they all have the confidence to win but it’s just a matter of having the experience.”

“Four day tournaments are a lot harder to win than two day tournaments which most amateurs play, I guess that’s the biggest hurdle for those guys to get over is playing four rounds. I wouldn’t be surprised if there was at least one or two of them up there on Sunday.”

Leaney has just about come full circle now and is now proud to help mentor the young players on Tour just like Smith, Terry Gale and Roger Mackay did for him all those years ago.

“When I won 25 years ago I played with Wayne but I also played with Terry Gale who was about the same age as I am now. I was 22 years old when I won as an amateur and Terry was in his mid-40’s so he was kind of in the same career path as I am in now,” he said.

“It’s amazing how it has turned full circle because I turned Pro before half these guys were born. It sort of hit hard, that I am getting older, I don’t feel like I am 47-years-old but it’s nice to have the chance to get to know these guys and help them.”

“Guys like Wayne and Terry and Roger helped me and golf is that sort of game. Everyone always tried to help each other out. Even though in the end we are all trying to win, it’s you against the golf course not you against the field so it’s nice to help people when you can.”