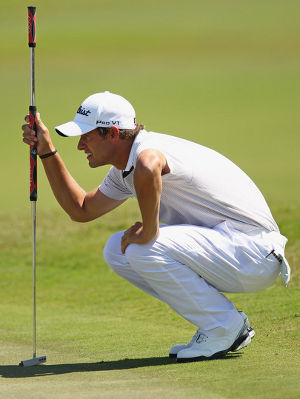 FRESH from his US Masters performance Adam Scott has moved to San Antonio for this week’s 2011 Valero Texas Open, where he is defending champion.

Scott should be chock full of confidence following his T2 with Jason Day at Augusta and his new-found expertise with the long putter.

Added to that Scott has won four of his seven tour victories in Texas and he’s entitled to be a raging favourite.

Maybe the only negative will be getting over the almost-won-it Major blues.

“It’s certainly a big let down I think mentally or emotionally after any major, whether you’re in the mix or not,” Scott said in Texas today.

“It certainly does take a lot out of you, it’s not just the tournament week but it’s the weeks before, a lot of practice and the weeks leading up to it. So … it was important for me to have a couple days where I did not much and it was nice to be at a nice resort here to do that.

“Hopefully (I can) get back in the swing of it today in the pro-am and, you know, hit a few balls and recalibrate and ready to go for tomorrow.”

Scott won the title by one shot over Fredrik Jacobson last year on the Greg Norman designed TPC San Antonio.

The 2011 Valero Texas Open will be telecast on Fox Sports:

Friday 1st Round 5am to 8am

Saturday 2nd Round 5am to 8am

Sunday 3rd Round 5am to 8am

Monday 4th Round 5am to 8am