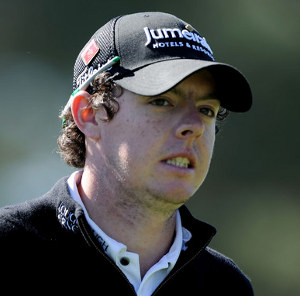 NORTHERN Irishman Rory McIlroy and Spaniard Alvaro Quiros sit on seven-under and lead the 2011 US Masters by two strokes after the first round at Augusta National.

Geoff Ogilvy carded a 69 and is the best of the Australians. He trails the joint leaders by four strokes.

McIlroy, 21, is the youngest first-round leader in the tournament’s history and broke a record set by the then 23-year-old Seve Ballesteros in 1980. Ballesteros went on to win the green jacket.

“I would take 65 all day long, but it could have been lower,” McIlroy said, referring to a missed birdie chance at the last and an eagle attempt on the 15th that went agonisingly close, amongst other opportunities.

“I feel very comfortable with my game and it was nice to see a few putts drop in and hopefully I can build on it.”

It was the young Ulsterman’s best round to date at Augusta by five shots and the best opening round since Greg Norman’s course record of 63 in 1996.

Quiros had the crowd in awe with 340 yard drives and a sizzling back nine.

The 65 by the joint leaders put them two clear of South Koreans Yang Yong-Eun and K.J. Choi and three strokes clear of the first Americans on the leaderboard, Matt Kuchar and Ricky Barnes.

“I’m pretty happy with the way I played,” Ogilvy said. “If I’d had a crazy putting day I could have gone pretty low but it was a pretty fair score.

“I haven’t been lucky enough to play this course in weather like this very often. The pins aren’t savage, the weather’s perfect.

“I shot 70 in the first round the first time I played here, which was very satisfying, but I like how I played today.

“Obviously there are a few guys who had a few lower but three more (69s) and I’ll probably be looking semi decent.”

Adam Scott started with a disastrous double bogey on the first but with his new broomstick putter working reasonably well fought back to finish on even, along with Aussie debutante Jason Day.

“I wasn’t super sharp with anything, not quite in my rhythm but I haven’t shot myself in the foot,” Scott said.

“For me here over the years, two-over through six (holes) is about even, so it would be really nice to get off to a good start one of these days.

“I was in poor shape from the get-go. It was just a bit of a grind. I’m certainly going to need to play some good golf from here on, but you don’t win it today, although you can certainly lose it.”

Pre-tournament favourite Aaron Baddeley was very disappointed with his driving and finished with a 75 along with Robert Allenby and Stuart Appleby, who is battling a back injury.

Defending champion Phil Mickelson had a not unusual wayward driving day but at least led the television cameras into some interesting parts of the course and some attractive garden areas.

In his usual manner he scrambled well and didn’t post a bogey till the last. He finished at two-under still well in the hunt for his fourth gold jacket.

“I scrambled well to stay in (the tournament), but I also let four or five birdie opportunities slide,” Mickelson said.

Searching for his 15th Major and first win in 18 months, Tiger Woods posted a reasonable 71 and was happy with his putting, just one area of his game that has been a shadow of his former self.

“I hit beautiful putts all day – couple of bad ones, but the round should have been 68 or 69,” Woods said.

World No.1 Martin Kaymer had something of a shocker and struggled to a 78 while Ireland’s three-time major winner Padraig Harrington had a disappointing 77. World No.2 Lee Westwood had an even par 72.