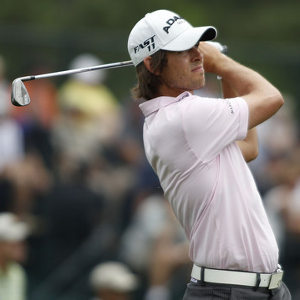 AARON BADDELEY is just one shot off the lead going into the final day of the 2011 Shell Houston Open.

Baddeley shot a six under 66 to go with his second round 65 and should go into the final round early Monday – and into the US Masters later in the week – confident he is in real contention at both venues.

Looming large however is defending Masters Champion Phil Mickelson who put everything together to shoot his lowest round in two years.

His nine-under 63, equal to the course record at the Redstone Golf Club in Humble, Texas, saw him at joint leader at 13-under with 46 year old Scott Verplank.

Verplank, a very talented golfer who struggles with a wrist injury, joined Mickelson at the top of the leaderboard with a birdie on the tough 18th.

Baddeley, his playing partner, hit a better drive than the American but showed his nerves when he pulled away from his 160 yard approach shot a couple of times.

Baddeley missed the resulting long birdie putt but maybe that is a blessing in disguise as it will take a lot of the spotlight off him going into the final round.

Baddeley has been a winner on the US PGA Tour already this year and has rejuvenated his game in 2011by going back to his original swing and  his early-years coach Dale Lynch.

Mickelson on the other hand will revel in the spotlight of being in the final group for round four and the hype it will add to his chance of back to back Masters titles.

Mickelson had a scintillating round, hitting 17 greens in regulation and chipping in a 51 footer for par on the one green he missed.

“People have talked about winning the week before a major as not necessarily the greatest thing, because it takes away energy, or what have you,” he said. “I felt like in ’06, it was really a benefit to gain the momentum and confidence of winning a golf tournament right before, especially the Masters.”

The next best placed Australian was Robert Allenby who shot a 67 to be nine-under and four behind the leaders.

Greg Chalmers (66) and Nathan Green (69) are on seven-under tied for 16th while the tournament’s early leader Nick O’Hern has slipped to five-under after rounds of 65, 74 and 72.