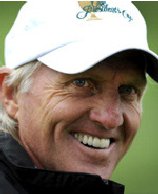 GREG NORMAN’S International team for the 2011 Presidents Cup at Royal Melbourne has received a boost with news a scheduling conflict between the cup and the South African Open will likely be averted.

On current standings, Norman could lose the top half of his team if the five leading South Africans – Ernie Els, Retief Goosen, British Open champion Louis Oosthuizen, Charl Schwartzel and Tim Clark – were swayed by national loyalty to stay at home.

US PGA Tour Commissioner Tim Finchem has met with his European counterpart George O’Grady to thrash out the conflict over those very important November 14 – 20 dates.

O”Grady said the European Tour would “do whatever we can” to sort the problem out and that he was hopeful of a resolution by the upcoming US Masters in early April.

The Presidents Cup will be held at Royal Melbourne Golf Club from November 14 – 20.

Norman, as captain of the International Team (the best of the rest of the world excluding Europe) will face off against US Captain Fred Couples and his team of leading American golfers.

It should be a cracker.