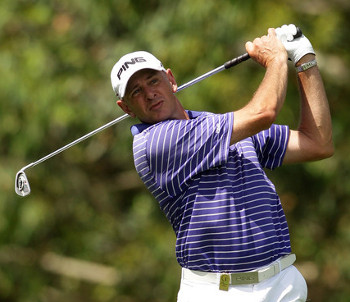 Fowler fought gamely down the final stretch but dropped shots on his last two holes to finish three behind the Scot, who was certainly delighted with his first tournament victory in 19 years.

Lyle had been without a victory since winning the last of his 18 European Tour titles in the 1992 Volvo Masters but brought that barren run to a commanding end with a flawless final round 70 over the Mission Hills World Cup Course to finish on 12 under par 204.

“You wonder after about four or five years whether you’ll ever win again let alone nearly 20, so this is very special,” the 53 year old five-time Ryder Cup player said.

“I joined the Senior Tour and it didn’t happen as quickly as I expected it to, so you do have doubts.  My trophy cabinet has been gathering dust over the years so  I feel relieved to get a win and it’s even better that it’s here in China on this course. This answers a lot of questions I had about myself.”
Lyle, a former British Open and Masters Champion, finished runner-up behind Peter Senior at the Australian Senior Open last November and currently leads the European Senior Tour Order of Merit after five events.

“Peter (Fowler) played well and put the pressure on when he got to one shot but he found the rough on 17th and all though he recovered really well he missed a six footer for par which gave me a two shot lead again going down the last which really helped,” Lyle said.

The next European Senior Tour event will be the US Senior PGA Championship at Valhalla Golf Club in Louisville, Kentucky, from May 24 to 29.