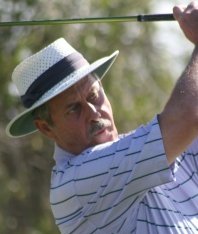 AUSTRALIA’S Garry Merrick has won the 2011 New Zealand PGA Senior Championship with a three round total of four under par.

The South Australian shot a solid final round two-under 70 as others around him fell away at the Wairakei Golf and Sanctuary, Wairakei, Taupo.

Merrick began the day three behind overnight leader Lucien Tinkler and started with a flourish, birdieing the par five first hole, then had two more on the 11th and 12th before a sole bogey on the 17th hole.

New Zealand’s Garth Domigan finished his round birdie-eagle to vault over a bunch of players to take out second placing, one shot clear of American Terry Dill.

First day leader Jim Lapsley of Queenstown slipped back to fourth placing with a 75, while 36-hole leader Tinkler faded badly with a last round of 80.