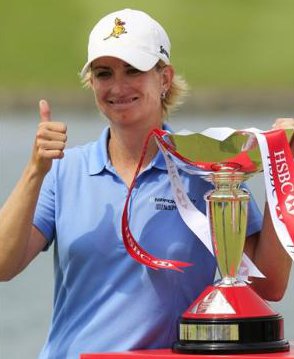 AUSTRALIA’S Karrie Webb has had her first win on the LPGA tour in almost two years after snatching a one shot victory at the HSBC Women’s Championship in Singapore.

“I’m one ahead of my age,” Webb quipped after securing her 37th LPGA tour title.

“I kicked it in on the back nine. I got it done and it feels great,” she said.

Webb was three strokes behind tournament leader Chie Arimura of Japan after a bogey on the 10th hole but a red hot putting streak saw a string of birdies and she finished with a 3-under 69 for a 13-under total (275).

New world No.1 Yani Tseng of Taiwan (67) jumped into contention with five birdies on the front nine, but couldn’t keep up the pace and finished in third place  three shots behind Webb.

Webb has had a lean time on the tour since 2007, claiming just one victory in Phoenix in March 2009.

But the 36 year old showed glimpses of the form that took her to seven major titles and made her the dominant player in women’s golf.

“I definitely take a lot of confidence from it,” Webb said. “I putted the last couple really well, I’ve putted well pretty much the whole four weeks that I’ve played.”

Webb was pound of the way she had reined in her reactions to hitting bad shots.

“I have not had a complete week where I didn’t let bad shots get me down and I got up and down fairly often,” she said of the win.

“I shrugged off the bogeys fairly quickly as well. The job I did mentally is probably the best job I’ve done for a long time.”