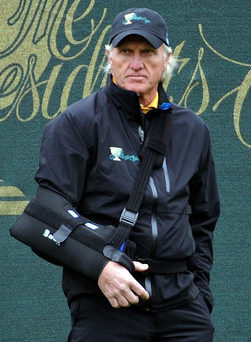 GREG NORMAN is excited at the prospect of returning to Royal Melbourne as captain of the International team to try and wrest the Presidents Cup from old friend and rival Fred Couples next year.

PGA TOUR Commissioner Tim Finchem has just announced both Norman and Couples would be returning as team captains of the 2011 cup in Melbourne, scene of the International team’s only outright victory.

The two captains actually faced off against each other as players during that match in 1998 and of course Couples turned the personal tables when he lead the US team to a victory over Norman’s team in San Francisco last year.

As first-time captains at The Presidents Cup 2009, Couples and Norman each led strong teams as they competed in front of record crowds at Harding Park Golf Course.

“I’ve always said that some of my best memories in golf were playing in and winning The Presidents Cup in Australia in 1998,”  Norman said today. “And then after the incredible experience of serving as captain of the 2009 event, that went to the top of my list.

“So to have the opportunity to be International Team captain once more and to return to Royal Melbourne to do so, it’s beyond words how thrilled I am.

“Freddie and I are great friends, so to have him on the other side as captain on the other side makes it all the better. I think it will be a joy to go to my home country and a golf club that I’m a member and try to finally win the Cup back after 13 years. It will be an honor.”

Couples said serving as US Team captain last year was “one of the best weeks of my life”.

“I knew as soon as the last putt dropped on Sunday in San Francisco that I would do this again in a heartbeat if I were fortunate enough to be asked,” he said.

“I’m looking forward to returning to Royal Melbourne, this time as a captain, and to have Greg Norman again as the International Team captain, in his home country, is going to be great for all of us involved, for the fans and for The Presidents Cup itself.”